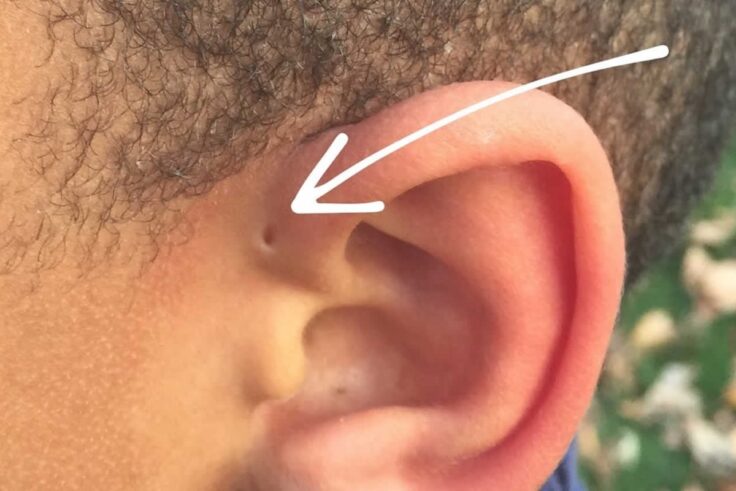 Only a few people have a tiny hole above the ear. But what does this mean? Is it a sign of luck? Or an evolution mark? Let’s find out!

We all have unique characteristics that make us different from others. Some of these differences may be obvious, while some may be subtle.

If you find yourself noticing every detail about other people, you may also notice that some people have a very tiny hole above the ear. Perhaps you even have a similar hole.

From a distance, it seems like a birthmark, a piercing, or even a small scar. But it’s actually something a lot more interesting, that only a small number of individuals have.

There are even superstitions regarding them in some cultures. For example, this is thought to bring fortune to a person in Ethiopia.

What Is This Tiny Hole Above The Ear?

Known as preauricular sinus or pits, it is a congenital abnormality that arises during the early growth of the fetus. It was first reported in 1864 by a scientist named Van Heusinger.

It’s also a genetic condition, so if you have it, your chances of passing it on to your children are higher.

The first and second pharyngeal arches cause the hole, which is commonly found where the upper ear cartilage meets the temple.

This small hole above the ear is essentially an unnaturally located sinus tract beneath the skin.

The defect, which can affect both ears, isn’t linked to hearing loss, although it has been linked to a hereditary disease in extraordinarily rare cases. To rule this out, a newborn which has a preauricular pit will be investigated for other malformations.

While preauricular sinuses are normally harmless, bacteria can get stuck inside them and cause infections or even benign cysts.

In such circumstances, proper treatment and antibiotics will help you remove the infection. But, if it gets severe, you can choose to have the pit surgically removed to avoid further issues.

Despite the fact that doctors classify it as a defect, multiple hypotheses imply that a preauricular sinus is more than that.

Evolutionary biologist Neil Shubin presented one particularly compelling argument. He told Business Insider that the tiny hole might be an “evolutionary remnant of fish gills” in an interview.

Shubin’s claim is based on the assumption that humans and fish descended from a common ancestor millions of years ago.

Whether you have a tiny hole above the ear or not, it is good to know that the preauricular sinus is not a life-threatening condition and can be easily fixed via surgery.

But what’s sure is that the preauricular sinus is an abnormality, a misplaced sinus tract that can cause infections or even benign cysts.

So if you have this tiny hole above the ear, schedule an appointment with your doctor. It is nothing to worry about, but it’s better to monitor it and take action when needed.

If you're looking to reduce weight and obesity, here are five not-so-obvious eating tricks that can help you stay fit and healthy.
Beth Williams 6 months ago

If you’re not sure whether intravenous therapy is right for you, it’s important to understand what it actually entails before deciding.
Beth Williams 7 months ago

Synbiotics are gut health supplements that offer an easy way to get the benefits of both probiotics and prebiotics in one convenient pill.
Beth Williams 7 months ago