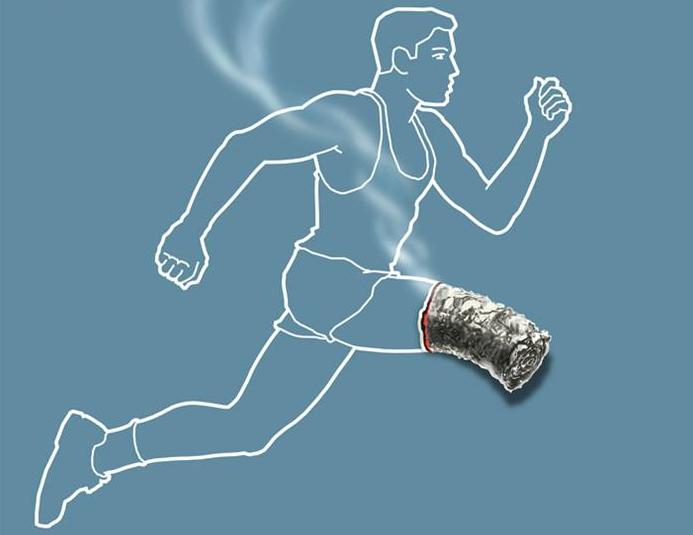 Since there are many smokers among us and I had in plan to talk about the smoking, I said to analyze the effects of smoking on the body and on athletic performances.

It’s hard to believe that there are still many people over 13 years old who does not know that smoking is harmful and highly damaging our health.

But sport is an area where effects of smoking are easily observable. The good thing with the sport is that some people who practice it, choose to quit smoking for  athletic evolution, which is inhibited by cigarettes consumed.

If you analyze in details the extent to which smoking affects the body, you can not really see that there is any area of ​​the body not affected by this flaw.

Smoking can lead to gum disease, teeth cavities and bad breath. Incorrect oxygenation of the body and narrowing of blood vessels can work together for the development of stroke. Smokers are exposed to a higher risk of cancer of the mouth and are 10 times more likely to develop lung cancer and emphysema compared to nonsmokers. The secretion of mucus in the lungs is reduced, and this may lead to a chronic cough.

Nicotine increases blood and lead to blood clotting. Carbon monoxide kidnaps the oxygen in the blood and causes the appearance of cholesterol deposits on artery walls.

Smokers are exposed to greater risk of developing cancer of the esophagus, throat and pancreas. High blood pressure caused by smoking can seriously damage and kidney. 40% of men were likely smoker death before reaching retirement age compared to nonsmokers who stands at 18%.

Did I scare you a little? Or maybe you were already scared and not interested.

Because breathing is directly affected by smoking, there is a severe airway obstruction and a decrease in the level of oxygen absorbed into the blood. A smoker pulse is 30% faster than that of a nonsmoker.

Rapid heart rate and blood lead to poor circulation through the blood vessels, thereby reducing performance. Think of how many times it does not matter very much a repeat of last tortured or extra minutes of cardio when you want to lose weight. Because smoking lowers normal functioning of the lungs, fixed air run out when you need it most.

Because smokers produce more phlegm, it blocks their airway and breathing quality is thus reduced. So the muscles do not receive enough oxygen and receive high levels of carbon monoxide, which binds to hemoglobin rather than oxygen.

Tar interfere with the cleaning process of the lungs, allowing pollutants to settle makers around. Smoking reduces the oxygen maximum access to 10% and can cause serious damage to cells, which produce testosterone.

1. Get fewer benefits after practicing sport;

6. Smoking causes fatigue during and after exercise;

7. According to a study on adolescents who smoked 5 days, they suffered a decline in physical strength by 8% compared to those who had never smoked.

Other Harmful Effects Of Smoking

When the body is subjected to relatively strenuous exercise such as running, swimming or playing sports at competitive level, it will need more oxygen to be delivered to muscles.

Both bronchospasm, and increased phlegm production causes airway obstruction, decreasing total lung function, which will lead to a much lower physical performance. It turned out that the normal development of lungs stop smoking teenage girls, which would result in limiting the age of adult respiratory capacity.

Besides affecting current fitness level, smoking may limit your physical potential and your  future.

We will return with another article about how smoking affects performance in bodybuilding and sports and how some bodybuilders choose to smoke in the defining period.

If you're looking to reduce weight and obesity, here are five not-so-obvious eating tricks that can help you stay fit and healthy.
Beth Williams 5 months ago