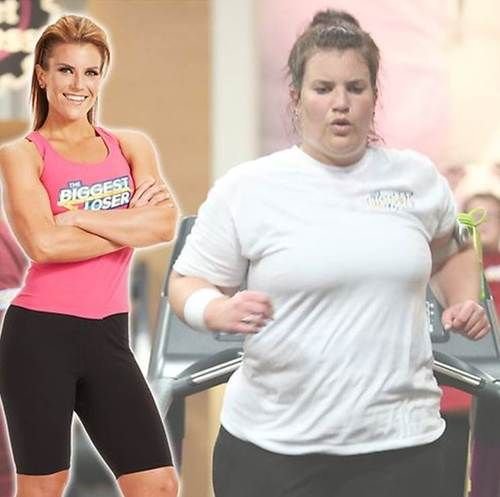 Greet the New Year with desires, ideals and well defined objectives! We decided to motivate you, to make you stand up and lose weight! This is the story of the winner of slimming show The Biggest Loser U.S. in 2013. Before and after pictures will motivate you to turn this new year 2014 into a success against extra pounds!

The final episode of Season 14 of American show The Biggest Loser has been very exciting! When Danni Allen entered the plateau show displaying wonderful silhouette, emphasized by a red dress and in the background was projected a picture of her obese, the audience had actually feel like anything is possible. If that woman with many extra pounds managed to remove them through hard work, it means that anyone can! Just be determined and have a latch that makes you say, “Okay, that’s it.”

Danni Allen is the biggest looser and at the age of 26 she reduced her weight to half. This is a story of determination and ambition!

The Story Of The Biggest Loser

How I gained weight: My weight was a culmination of wrong nutrition choices and lack of exercise. I think I fooled myself eating healthy foods such as fruits and whole grains . My problem was that I was eating huge portions! Of all, the biggest problem was my state of mind. I didn’t believe in me, I had “a book of excuses” and I never thought I can do this.

Latch: My father came to the hospital in February 2012. I got that terrible phone that the whole family was called to the hospital. It was the worst moment of my life , so I thought I would lose my father. By a miracle, something changed and my father fully recovered . I celebrated the anniversary of 50 years in hospital – when I knew I had to change. I wanted the age of 50 years to be only half of my life and if I do not change habits , would like me to spend my 50th year in the hospital.

How I lost weight: Coach Jillian Michaels beat the sh*t out of me! Mentally and physically! The first thing I learned was that I have to maintain my strong psyche , otherwise I will have no chance of success in terms of my weight . I really worked on acquiring a mentally strong! Once I did that , the sky was no limit! I monitor daily calories intake and consumption , using an application. Now I feel I can dream again. I feel like Forest Gump, I feel like running all over America! The sky is the limit !

Eat plenty of fresh, organic , unprocessed foods.
Go out every day or at least 4-6 times a week.
Adapt your menu so you eat healthy when you’re not home – when you’re in town or on vacation.
Manage your stress levels and get enough rest.
Create yourself a life plan, not just weight loss, based on these recommendations. Forget the diet! You will be able to lose weight and stop gaining weight again.

The Biggest Loser’s Menu For A Day

Transform Your Life With These 10 Rules For Happiness

Unlock the key to lasting happiness and fulfillment with these 10 proven rules for happiness. Transform yourself into a better person today.
Julianne Bodo, CES, PES 5 hours ago

The potential benefits of intermittent fasting help promote both weight loss and a healthy lifestyle. Here are the most important benefits.
Julianne Bodo, CES, PES 3 days ago

Looking to lose 10 pounds in a month? Here's an effective weight loss plan that prioritizes both safety and sustainability.
Mark Norey, CPT 2 weeks ago

What Does Counting Macros Mean And How To Do It?

Counting macros means tracking the volume of proteins, carbs, and fats your body gets daily and adjusting it to reach your fitness goal.
Mark Norey, CPT 2 weeks ago

5 Common Weight Loss Problems And How To Solve Them

Losing weight can be a challenging and frustrating process and it often leads to some of these 5 weight loss problems. Here's how to fix them.
Mark Norey, CPT 2 weeks ago

8 Tips For Losing Weight Over 30

Losing weight can be a challenge at any age, but it seems especially difficult as you get older. So try these tips for losing weight after 30.
Mark Norey, CPT 4 weeks ago

If you're a health-conscious person and want to stay fit, you should follow these healthy tips to lose weight safely at home.
Beth Williams 2 months ago

How To Measure Your Body Fat Percentage At Home

There are different ways to measure your body fat percentage at home, but the most accurate one is the skinfold calipers method.
Mark Norey, CPT 2 months ago

How To Burn Fat And Lose Weight By Swimming

If you want to burn off fat instantly, you have to combine swimming with interval training. Here's why and how to lose weight by swimming.
Beth Williams 3 months ago

Can A Nutritional Cleanse Really Help You Lose Weight?

A nutritional cleanse is a detox diet that helps you lose weight by replacing sweet, processed, and fatty foods with healthier alternatives.
Beth Williams 3 months ago