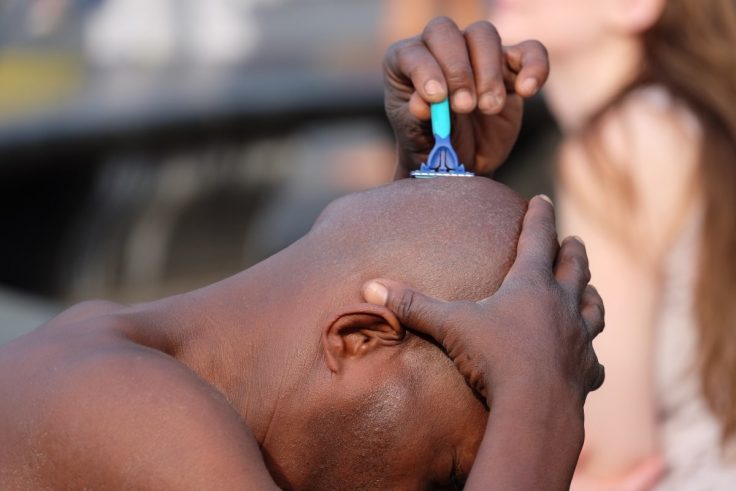 There are some things you don’t know (and myths you wrongfully believe) about baldness and hair loss. So let me clear things out!

It’s something every man dreads. You wake up and see a bunch of hairs on your pillow; you look in the mirror and notice that your hairline isn’t quite where it used to be.

Then you brush your hair or hop in the shower and see clumps of your precious locks falling out time after time.

Hair loss is a painless condition, but it can be a very stressful one and it affects countless people all over the globe.

It’s no wonder that we’ve been trying to combat baldness for thousands of years, dating all the way back to the times of the Ancient Egyptians.

What You Need To Know About Baldness

If you’re facing hair loss or worry about it in the future, here’s all you need to know:

If you do notice the early signs and symptoms of hair loss, just know that you’re definitely not in the minority.

Statistics show that around half of men are affected by pattern baldness by the age of 50 and that percentage just keeps on climbing in older age groups.

It’s also important to note that hair loss isn’t just an issue for men to deal with. Around a quarter of women will have to handle hair loss by the age of 50, and many more will encounter the problem later in life.

2. It’s Not All About Your Genes

Many people believe that hair loss is totally reliant on genetics. While it’s true that genes can play a part in your likelihood of going bald later in life, they aren’t the only factor in play.

So, even if all the men in your family have gone bald, you won’t necessarily have the same fate.

Hereditary pattern baldness is the most common form of hair loss, but if you start losing your hair, it could also be due to your lifestyle, your environment, some medications or supplements you’re taking at the time, or even a sign of an underlying medical condition.

3. It Can Be Treated

As stated earlier, people have been trying to cure and treat hair loss for thousands of years.

In the past, options were limited and most people simply had to accept that their hair loss was going to happen, regardless of what they did.

Now, however, there are real medical and technological breakthroughs in the field of hair loss research, and you have a lot of options to choose from.

Laser treatment caps from Illumiflow can stimulate hair growth and special serums and shampoos can strengthen your hair and make it less likely to fall out.

A lot of men have a tendency to look at the males in their families who are bald and blame them if they suffer from hair loss too.

However, studies have actually shown that if you want to blame anybody, you should be pointing the finger at your mother.

Research has revealed that the genetic signals that trigger male pattern baldness come from the X chromosome, which is inherited from the mother, not the father.

Either way, it’s nobody’s fault really, as none of us can control our genetics.

5. It Can’t Hurt To Look After Yourself

Hair loss is still a very complex issue and we have a lot to learn about it. However, studies have linked accelerated hair loss with high stress levels, anxiety, depression, and various lifestyle choices like smoking or having a poor diet.

While there is still plenty of research to be done in these areas to really find out the true links between lifestyle and pattern baldness, it’s clear that looking after yourself isn’t a bad idea.

Having a healthy diet, treating your hair with care, using good quality products, and trying to de-stress whenever possible are all positive actions you can take.

6. It’s Nothing To Do With Testosterone

There’s a bit of a myth that baldness is connected with testosterone, with some people saying that high testosterone levels lead to hair loss. In truth, there’s no scientific evidence to support this claim at all.

DHT, a by-product of testosterone, can cause hair loss in some people but is perfectly tolerated by others, so it all varies from one person to the next.

So whether you have high or low T levels, you don’t need to worry about them affecting your head of hair.

Hopefully, now you know more than before about baldness, hair loss treatments, and the roots of this male condition.

Millions of people suffer from chronic fatigue syndrome annually. So to fight this tiredness, you need some of the best energy supplements.
Beth Williams 2 weeks ago

Late-night coffee, your phone, or the lack of exercise might be just a few reasons why you struggle to sleep at night. But there's more!
Beth Williams 3 weeks ago

Want to boost your testosterone levels, keep your prostate in check, or recover properly after a workout? Try these 5 supplements for men.
Mariah Belsore 3 weeks ago

Being pregnant is super-exciting. So when it's time to choose the right pregnancy clinic for you and your baby, follow these 3 steps.
Beth Williams 4 weeks ago

Headaches can affect all aspects of everyday life. But there are many things you can do to prevent headaches and alleviate the pain.
Mark Norey, CPT 1 month ago

If you’re a bodybuilder, knee valgus is a term that you may not know yet but it’s one that you don’t want to hear. Here's everything on this.
Mariah Belsore 2 months ago

A healthier you would sleep well, eat quality food, exercise daily, hydrate properly, and stay positive. Here's how to achieve this.
Beth Williams 2 months ago

Enema – Natural And Safe Ways To Try At Home

Enema is the process of emptying the bowels by flushing them with liquids to help treat constipation, soften the stool, and calm the rectum.
Mariah Belsore 2 months ago

Self-Care Activities That Won’t Cost You A Fortune

Here are a few inexpensive self-care activities and tips that you can incorporate in your daily routine to improve your inner self.
Beth Williams 3 months ago

How To Stay Fit And Healthy During Your Pregnancy

Pregnancy is a wonderful time and experience, but trying to stay healthy during pregnancy is a real struggle for most soon-to-be moms.
Beth Williams 3 months ago