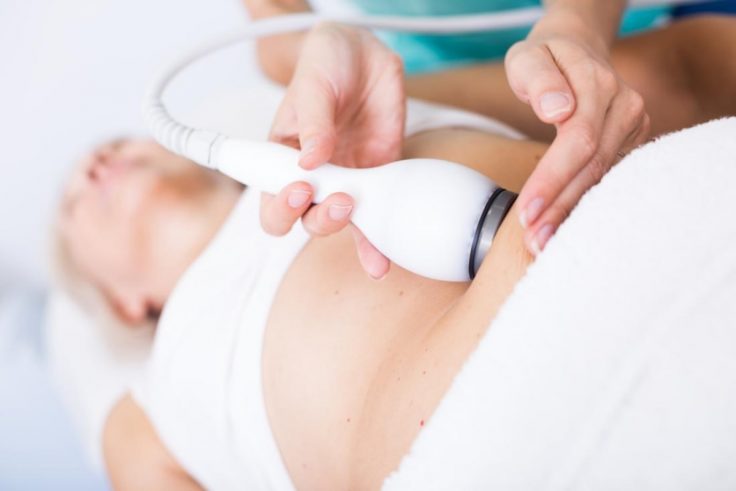 Miracles – aren’t we all looking for them? CoolSculpting is a non-surgical, fat-removal miracle treatment that quickly delivers real results.

What is something almost everyone is self-conscious about? Ask around and I’m sure you’ll see a pattern: unwanted fat.

Maybe it’s flab under their arm, love handles, saddlebags, or puffiness around the bra strap. Sometimes it seems that, no matter what, the fat just won’t go away.

Anyone is at risk for stubborn fat areas. No matter how much you exercise and no matter how well you eat, excess fat can accumulate and affect your body shape.

Even those who indulge in an organic, vegan diet and hit the gym five days a week can be susceptible to the “belly pooch“.

That’s why CoolSculpting is a fat-removal miracle for those who can’t seem to shake the fat no matter how hard they try.

So, What Is CoolSculpting?

CoolSculpting is a fairly new FDA-approved treatment with a very simple approach to eliminating fat cells.

Developed after the discovery that children who eat ice or popsicles are susceptible to fat loss in their cheeks, CoolSculpting is simply the elimination of fat by freezing it.

During a CoolSculpting procedure, the CoolSculpting machine is placed on top of the skin on the problem area. It lowers the temperature of the fat cells to around 40 degrees.

This crystalizes the fat cells through a process called cryolipolysis, causing the cells to die.

Results are not immediately visible. Over the course of around three months, the dead cells are processed by the body and carried out in waste.

The Costs Of This Fat-Removal Miracle

Because CoolSculpting is not a one-size-fits-all procedure, costs can vary greatly from patient to patient.

Some patients return for a second round or to treat another problem area, so that also factors into the overall cost.

According to CoolSculpting’s website, the average cost of treatment is calculated to be between $2,000 and $4,000. But the cost will vary based on the location, the number of treatments and areas treated.

During your consultation, you and your provider will be able to create a custom plan based on your needs.

Am I A Candidate?

CoolSculpting is not a weight-loss procedure. It’s not a solution to obesity or designed for excess skin reduction due to factors like extreme weight gain or pregnancy.

It is designed for the fat-cell reduction in those who have unwanted fat in specific areas.

It’s also important that candidates have realistic expectations for what they want to achieve by CoolSculpting.

What To Expect During CoolSculpting?

CoolSculpting is a multi-step process that includes:

Before the procedure begins, the area being treated will be marked and a layer of thin material will be laid to protect the skin.

Pillows and blankets will be placed around you for your comfort. The machine will then be applied to the treated area.

Most people experience no pain or discomfort, just a cool, pulsating suction on the skin.

No downtime is needed after the procedure. In fact, some patients compare it to a spa experience.

So, relax into the pillows, take a nap or watch an episode of your favorite TV show, and let the CoolSculpting do its job.

Though no procedure comes without risks, CoolSculpting is a relatively simple, non-invasive treatment. Patients can even return to work right after the procedure.

Best of all, CoolSculpting is not just a fat-removal miracle, but one that delivers real results.

For those with problem areas of fat accumulation who feel self-conscious or insecure, CoolSculpting is absolutely worth a consultation.

No, vegans don't eat just salads, they're not weak, and the vegan food isn't expensive. This is the truth about all vegan stereotypes.
Julianne Bodo, CES, PES 1 year ago

How Artificial Intelligence Can Help In Mental Health

Artificial Intelligence (AI) is the next step to revolutionize health facilities. Here's how it is currently used AI for mental health.
Beth Williams 1 year ago

A medical alert system is a device that looks like a bracelet and provides safety to the well-being of the vulnerable person that wears it.
Beth Williams 1 year ago

Using complex methods, scammers are attempting to defraud yet another vulnerable group — the hearing impaired. Here's how to recognize scams.
Beth Williams 1 year ago

Coloured contact lenses are specially designed lenses that look opaque and can transform the color of your eyes while wearing them.
Beth Williams 1 year ago

Sports enthusiasts and athletes use CBD to enhance performance, treat and prevent sore muscles, and relax after an intense workout session.
Beth Williams 1 year ago

Make your workout corner at home as cozy, modern, professional, or stylish you'd like with these simple tricks to decorate your home gym.
Julianne Bodo, CES, PES 1 year ago

There are four main steps you should follow right after you've been involved in an accident while running. Here's what to do!
Beth Williams 1 year ago

Why does the accuracy of your GPS watch sometimes falter, and what can you do to prevent that from happening? Let's find out in this article!
Beth Williams 1 year ago

The qualities that make a good nurse include dedication, humor, fast-thinking, compassion, and strong communication skills, among others.
Julianne Bodo, CES, PES 2 years ago