Keto Diet While Traveling – My Experience With Airplane Foods 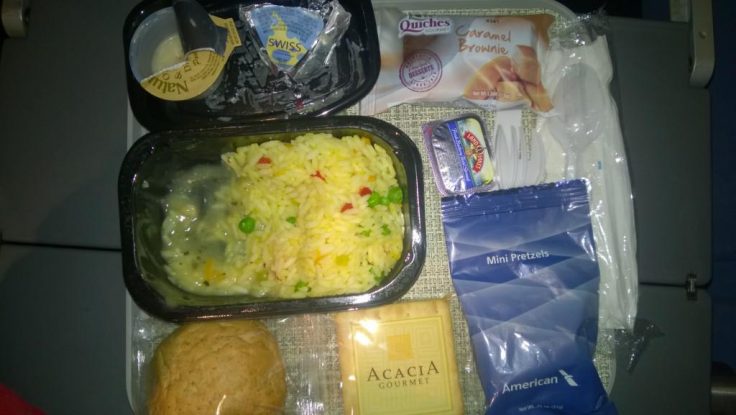 This is my personal experience with the airplane foods: it sucks! And if you’re on a diet, during the flight you’re actually not on a diet.

Most people who have been on more than ten long-haul flights will agree on one thing: airplane foods are pretty lame (to say the least). Of course, I’m not talking first class, catered by Ducasse and Robuchon and the likes, but the good old economy.

Lovely airplane tray! (After I ate what could be eaten – sorry forgot to take the before pic!)

When complaints arise, airlines shield behind the fact that at high altitude, food needs to be saltier to taste right, the body dehydrates a lot, blah blah blah.

Is that an excuse to serve us some horrendous mush that’s supposed to be chicken? Or ridiculous ‘desserts’ which are branded as ‘caramel brownies’ but turn out to be 2/3 sugar and high fructose corn syrup with a dash of bleached flour…?

No, of course not!

Some companies ask you about your diet restrictions (Austrian Airways – I claimed to be diabetic) but give you the same meal as the others; while some others (American Airlines) don’t ask you anything and force you to choose between ‘pasta bolognese’ and ‘chicken and rice.’

I thus picked the chicken and proceeded to eat only the chicken (you know ketogenic and all…!).

Here’s what I got in my meal tray on a flight.

I’m pretty damn certain that if this was chicken in the first place, it had been soaked in brine or some other watery substance to make it moister, heavy, mushy and as a result is more easily chewable.

Good that I’ve got some supplements in my carry-on luggage to help me stay in ketosis while I am out of the home. Which supplement? I use Pruvit Keto brand after reading reviews here.

Anyway, in all likelihood, it was merely a chicken nugget type of thing, aka pulverized chicken debris, bleached and re-agglomerated to make a semblance of chicken breast… (Who believes that?!).

The  ‘sauce‘ coating the ‘chicken‘ (sorry about the abundance of quotation marks but this didn’t qualify for the real words!) was an indescribable white-ish concoction with hints of lemon (but not really) and thyme (but not really) with probably a ton of sugar to make the overall taste ’rounder’.

The ‘starter’ of the tray was a small portion of iceberg lettuce with a 1/16th of tomato (literally!). Luckily the salad dressing was not overly artificially sweetened and featured some good olive oil and tarragon vinegar.

The rest of the tray was:

BTW, the usual nuts served with first drink turn out to be pretzels on AA… unlucky for me! Where are my nuts?!!

What About The Drinks?

Drinks-wise, they are a lot better.

With an easy to drink 2017 Cabernet-Sauvignon ‘Les Thermes’ from Languedoc-Roussillon. The bubbly wine is surprisingly lovely (only flying out of Europe) – not Champagne but worth checking out.

The scotch is Dewar’s White Label, and the Bourbon is Jack Daniel‘s (you have to pay for those when leaving the US but not as you fly in for some inexplicable reason…!)

It Could Be Better!

In conclusion, I have to say I always pick the cheapest airline and don’t have any business complaining (and I don’t really because I know what to expect and was soon snacking on my Pork Rinds and homemade trail mix!).

But I am pretty damn certain that with slightly more effort, airline companies could offer a decent meal made with wholesome stuff, for no more money, even in cattle class!

PS: I wish all the best to all Americans who mostly fly within the countries’ borders (and some of these flights are long; it’s a big ol’ country!).

They do not get snacks or alcohol unless they pay for it (harsh) – aside from sodas and juices, the only choice from low carbs is that ‘coffee‘ and soda water… (coconut milk, almond milk, anyone?)

Any memorable experiences with airplane foods? Especially as a person on a diet? Any techniques to make it through?

Bonding With Your Baby – A Personal Story

As a new mother, bonding with your baby can be a real struggle sometimes. Here's the personal story of a mother of twins.
Mariah Belsore 12 months ago

Over 9% of the population is suffering from an eating disorder, so it's time to address this health issue by answering some common questions.
Mariah Belsore 12 months ago

Being diagnosed with cancer (any type of it) is really downing and life-changing. This is my real story of a breast cancer surviver-ish.
Mariah Belsore 12 months ago

My fitness journey has been a slow and harsh battle, so for those who don't know my motivational story, here it is in a nutshell.
Mark Norey, CPT 7 years ago

To inspire you in your weight loss journey, here is the story of Tallena Johnson from Fremont, California, who managed to lose 113 pounds.
Mark Norey, CPT 7 years ago

There is no limit on how far people can go when it comes to weight loss. Could you believe that a photo on Facebook helped her to lose 90 pounds?
Mark Norey, CPT 7 years ago

How A Working Mom Managed To Lose 90 Pounds

A working mom with 4 kids who managed to lose 90 pounds is the motivation you need! If she could lose that much body fat, you can do it too!
Mark Norey, CPT 7 years ago

Just like losing weight, you have to start making the changes and to trust that all this positive changes you're making will help you to cure acne.
Mark Norey, CPT 8 years ago