Initially very popular in France, the Dukan diet has rapidly spread worldwide and has become one of the favorite diets of people everywhere.

Since the Dukan diet is so beloved, we offer some easy to prepare recipes that can be enjoyed during the attack phase, at the beginning, when you lose most of the weight.

What Is The Dukan Diet?

Dukan Diet was created by French physician Pierre Dukan now more than 30 years, but began to be known globally with the publication of the book 13 years ago – when they were sold no less than 10 million copies!

Diet has four phases: attack, cruise, consolidation, and stabilization phase. Each and every phase has its rules that must be followed precisely.

In the attack phase, you can lose even two pounds a day just by eating foods rich in protein and low in calories.

Dukan Diet is popular because celebrities such as Jennifer Lopez, Giselle Bundchen, Penelope Cruz, and Kate Middleton used it to lose weight fast and get in shape. And it delivers real, realistic results.

What Is The Attack Phase?

The first and most intense stage of the diet lasts between 1 and 10 days, depending on the number of pounds you have to lose.

At this point, you have to respect a number of rules that help you lose weight fast:

More recently, Dr. Pierre Dukan says you should eat a tablespoon of goji every day, even during the attack phase.

You are allowed to consume an unlimited amount of these foods (except for eggs):

Here are four recipes that you can prepare during the attack phase of the Dukan diet:

3. Salmon With Mustard And Dill Sauce 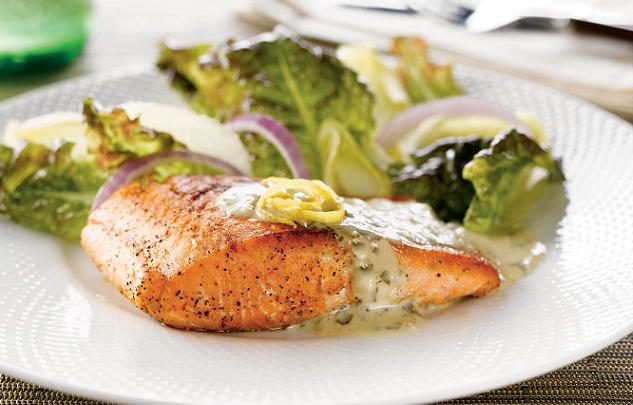 With these Dukan diet recipes, you’ll be able to lose weight and get in shape pretty fast. Just make sure you stick to the diet’s rules and the results will be even more dramatic.

the salmon with mustard and dill sauce is absolutely delicious, I would eat this anytime even not on the diet….but I’m very happy with the results of the diet, I lose 2 lbs per day on average. The muffins are good too.

Can I use sugar free coffee creamer?

Excited about getting started…..so basically on the first stage, all meats cannot be prepared with any oils, correct? I am leaning towards baking the meats and eating raw tuna….I am hoping this will work…please advise

I don’t understand the alternating in Phase 2?? Do you eat all protein one day then protein plus vegetables from the list the next day?

Super excited to do this. I usually walk about 35 minutes a day, is it ok to just keep my regular routine without upping the time in the second phase?? or is it important to add more time in the 2nd phase?? please advise.. 😉

I am gluten and dairy intolerant. Can I use unsweetened almond milk for coffee and cooking? Also have gluten free bread, are there guidelines that make that ok? I eat soy yogurt but I might just make my own since commercial has sugar in it. Thanks.

Ok….here we go…..seems simple enough, especially when time is one thing that you don’t have a lot of! In a wedding in 7 weeks and then vacation the week after! Want to be bikini ready….

Thank you. Sounds easy enough and possible. It looks like it will kerp me.motivated to the end.

Can you please give me some approved sweeteners? For example, is stevia or honey approved?

-2
Reply
All the nutritional information, health and fitness tips and advice offered here is solely for educational purposes.
We do our best to research and offer the most accurate information possible, but this doesn't replace or represent any professional medical advice.
For the right diagnosis and treatment you should always consult with your doctor.
Just so you know, Fitneass may receive some compensation from the links on this page.

7 Delicious Cocktails And Drinks For Brunch

If you're about to host a brunch, you're probably thinking about what beverages to serve. Here are the best brunch drinks and cocktails.
Beth Williams 2 months ago

The CrossFit Diet – What Do CrossFit Athletes Eat?

Nutrition is the foundation, CrossFit is the lifestyle. Here all you need to know about the CrossFit diet and what do these athletes eat.
Julianne Bodo, CES, PES 3 months ago

How To Stick To Your Diet Plan To Lose Weight Quickly

When you start a weight loss program, you have to work hard to stick to your diet plan. Here are a few tips to help you achieve just that.
Julianne Bodo, CES, PES 3 months ago

If you're looking for a natural way to boost your energy during the day, consider adding these foods high in energy to your daily meals.
Mark Norey, CPT 4 months ago

A fiber-poor diet is associated with a higher risk of developing diseases such as stroke, type 2 diabetes, and even bowel cancer.
Julianne Bodo, CES, PES 4 months ago

Want to follow the Mediterranean diet plan but don't know where to start? These expert tips should guide you to better health.
Beth Williams 4 months ago

If you're planning on following the ketogenic lifestyle, you must understand the ketosis process and how do ketones work. Here's your guide.
Julianne Bodo, CES, PES 6 months ago

Following a gluten-free diet is mandatory for those suffering from celiac disease or gluten allergies. Here's what you can and can't eat.
Mark Norey, CPT 6 months ago

Wanna go vegan and follow a plant-based diet but the lack of proteins in your meals scares you? Check out these plant-based protein sources!
Julianne Bodo, CES, PES 6 months ago