Weird Fitness Workouts | Would You Try Them?

Get over the tried-and-tested fitness methods and try these weird fitness workouts that have caught the fancy of many who swear by its benefits and are in no mood to turn back.

Yoga is an ancient fitness method that’s been in practice since centuries. But of late, many new variants have emerged which aim to intensify its fitness benefits in a shorter span of time. While some of these have been welcome with open arms, others are just plain whacky and it takes guts to try them out. One such variant is YOGAqua – yoga merged with Stand-up Paddle-Boarding (SUP). The idea behind this method is that since the asanas (postures) are done on a moving surface, it engages muscles that we normally don’t in other exercises. The best part of this workout is – it is done outdoors in the sea on calm waters. Students first learn to balance themselves on the stand-up paddle board and then begin doing various yoga poses. Even if you lose your balance, you just fall in the water. Sounds like a fun way to exercise while making a splash. 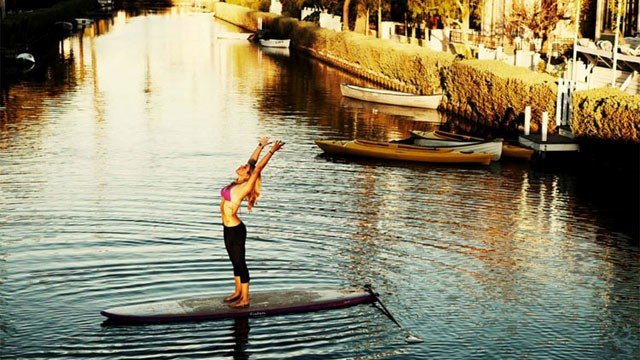 Imagine hanging from hammocks made of cloth in mid-air in a yoga pose. That’s AntiGravity Aerial yoga for you. A workout created by a gymnast who is also a professional dancer, it promises to increase physical agility and overall health while also having fun and being a bit creative. The fabric hammock is good for upper body workout and to strengthen one’s core. Enter a class, and you may find a bunch of students in an upside down meditation position dangling in air from the hammock or completely snuck inside it with only their feet visible, practicing what is known as the cocoon pose. If you want to practise yoga while defying gravity, then this workout is perfect for you.

Backward or retro running is nothing but running backwards without looking behind. A daily exercise for many in Europe and Japan, the thought of it sounds absurd but it apparently has a number of benefits, even more than traditional running say many.  So what are its benefits? The first one is that you can do it even if you are injured. Now no more waiting for the ankle sprain to heal, you can still run backwards. It’s also been observed that 100 steps backwards is the same as 1000 steps forward so you burn more calories with this workout. Since you are running backwards, you need to be alert to help yourself navigate the way. This heightens your senses and you also have fun doing this workout. Not so common here but there are various sprints and even marathons organised for backward running in Europe. So start running backwards to get forward in your fitness regimen.

Love singing out loud your favorite songs? Now you have the chance to sing and also get fit while doing it. Say hello to cycle karaoke! The concept behind this is that your singing is an indicator of your heart rate. If you can sing a song with the perfect notes whilst working out on the cycle, you are not working hard enough but if you are out of breath during a rendition, you are closer to achieving your fitness goal. Another reason to sing at the top of your voice while cycling in a gym is that is boosts everyone’s energy and you have more motivation and stamina than before. Making this a group activity will yield better results. So rehearse the lines of your favorite song and start singing it aloud the next time you hit the gym.

This clearly takes the cake when it comes to weird workouts. Doga is practicing yoga with your pet dog. Yes, you read it right! Through this workout, masters can bond better with their pets while getting fitter than before. Even the dogs perform yoga asanas like chaturanga where the dogs sit with their front paws in the air with the support of their human partners and sun salutations where the dogs are lifted on their hind legs by the owners.  The dogs are also used as props by their masters as they perform yoga poses. Like in the warrior pose, where the dog is balanced on the thigh or the forward bends where the dog is wrapped around the neck. It sounds completely bizarre but many dog owners in the West are thrilled by this workout and enjoy it more than the traditional exercise regimens. Looks like the dog pose is getting literal after all!

If you want to start your day the right way, then creating an early morning workout routine is a must. Here is how you can achieve this.
Beth Williams 4 days ago

6 Exercises You Need To Tone Your Entire Body

Looking for a set of exercises to tone your entire body? This full-body workout is beginner-friendly, highly effective, and costless.
Mark Norey, CPT 2 weeks ago

To get your motivation back and reach your fitness goals, you need to start easy, be consistent, rest along the journey, and never give up.
Beth Williams 3 weeks ago

Your dog deserves optimal health, and so do you. Keep these tips in mind to motivate you to get healthy together with your pet.
Mariah Belsore 3 weeks ago

Ways To Stay Fit That Don’t Feel Like Exercise

Staying fit doesn’t have to mean endless burpees or hours on the treadmill. You can get in shape while having fun at the same time.
Beth Williams 3 weeks ago

How To Maximize Your Workout With Three Simple Tweaks

Looking for simple ways to maximize your workout at home? Use fitness equipment that increases the difficulty and engages all your muscles.
Mark Norey, CPT 1 month ago

Dropping temperatures don't mean your fitness levels have to drop as well. Here is a quick guide on staying fit in the wintertime.
Julianne Bodo, CES, PES 2 months ago

Must-Know Strategies To Stick To Your Fitness Goals

Many of us know the feeling of wanting to accomplish our fitness goals but not knowing how to stick to them. Here are the best strategies!
Beth Williams 2 months ago

When food can't provide the nutrients your body needs, you turn to supplements. Here are the best nutritional supplements available.
Julianne Bodo, CES, PES 2 months ago