Top Sources Of Caloric Intake In The Average American Diet 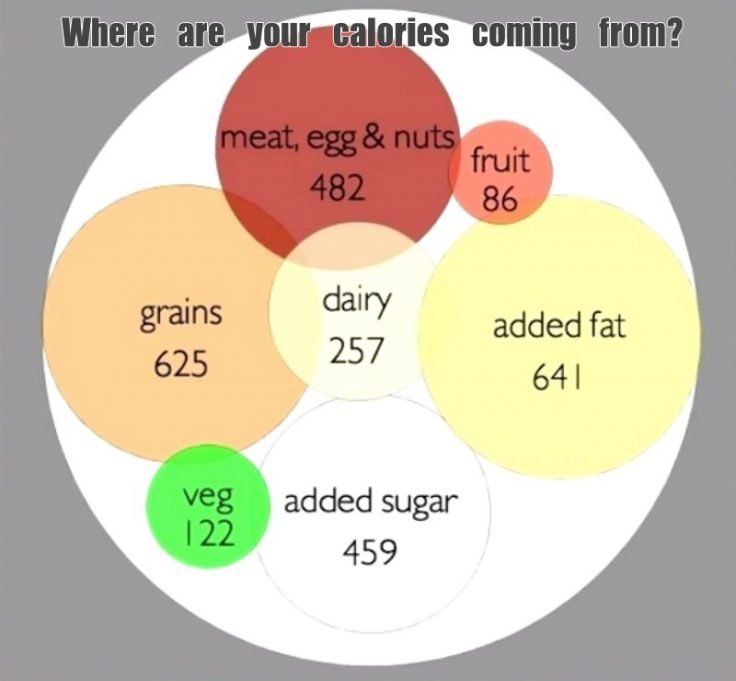 To put it in perspective, in 1970 the average caloric intake was 2168 calories. So we can see that with the increase of caloric intake there’s also an increase in the obesity rate.

There’s a chart in the picture below that shows the different sources of caloric intake in the average American diet. It was created based on data from the USDA ( U.S. Department of Agriculture ) and it was created by a group called Civil Eats and The University of Berkeley School Of Journalism. It’s based on data from 2008 because that’s the most recent data that was available.

The largest percent of calories in the average American diet is coming from added fats, and that’s not counting the fats that are naturally included in other foods on the chart. These are just added fats, so this is:

USDA has been promoting greens as a healthy food for the last 30 years. They’ve put grains at the bottom of the food pyramid and encourage us to eat them several times a day. While grains aren’t themselves an unhealthy food, they can actually be a very healthful food. Most of the greens we consume in America are so refined and processed that the most of the nutritional good stuff and the fiber has actually been stripped out of the food altogether.

These are incredible dense foods and when you eat them they pretty much instantly turn into glucose when they hit your bloodstream. So essentially, these foods are pure sugar.

One thing to note here is that eggs and nuts are mostly fat and most of the meat that Americans are eating is a really high percentage of fat too. So a lot of these calories are coming from fatty calorie dense foods. Even though 482 calories are represented by this category, it’s not necessarily a huge amount of food represented in this category.

That’s your high fructose corn syrup, refined white sugar and other sugars that may be added to foods. While most of these calories are actually coming from soda pop, it’s important to realize that they add sugar to almost everything and even the things that we don’t consider as being sweet foods like bread, salad dressings, beef jerky and even crackers.

Just imagine that you’re eating 31 teaspoons of sugar every day, because that’s how much 459 calories of sugar look like. Not a good picture, right?

That’s your simple milk, yogurt and cheese. But for those Americans who consume sweetened milk products like flavored milk, fruits yogurt, drinkable yogurt or other dairy desserts, the added sugars also increase your caloric intake and you gain more weight.

What it’s even sadder is that when this chart was created, potatoes were probably considered as a vegetable, so that would include your french fries and other potato products. But the chemical structure of the potato is mostly starch and it’s more chemically similar to grains than it is to colorful vegetables.

This is really a shame, because fruits are loaded with nutrients. Lots of people avoid eating fruits because of their high sugar content, but it’s important to realize that you’re not just getting sugar when you eat fruits. You’re getting enzymes, anti-oxidants, minerals, vitamins and fiber.

So to put it in perspective for you, if you already eat a pound of strawberries, you would get about 16 grams of sugar and 16 grams of fiber. But if you drink one can of soda, it contains about 39 grams of sugar, which is about 10 teaspoons.

I don’t know if any of you have ever tried to eat a pound of strawberries but it’s virtually impossible compared to how easily a can of soda goes down. Truly is just absurd that people are avoiding eating fruits due to the sugar, when we’re eating about 31 teaspoons of refined sugar in foods that we aren’t even realizing are sweet.

What we can also tell from this chart is that the average American diet is pretty deficient in minerals, vitamins, fiber and these other very vital nutrients.

To Lose Weight Is “Simple”

Added fats and added sugars, those two categories alone account for about 1100 calories or 41% of our total caloric intake. That is just calories coming from refined, processed sugars and fats that are added to other foods. That is in addition to all of the grains and meats and other actual foods that you’re eating.

So if you took added fat and added sugar out of your diet, you could still continue eating the same amounts of the other foods, but your caloric intake would go so low that you would probably start losing weight. You can lose weight just by eliminating those two categories of processed, refined, not-even-actual-real foods. 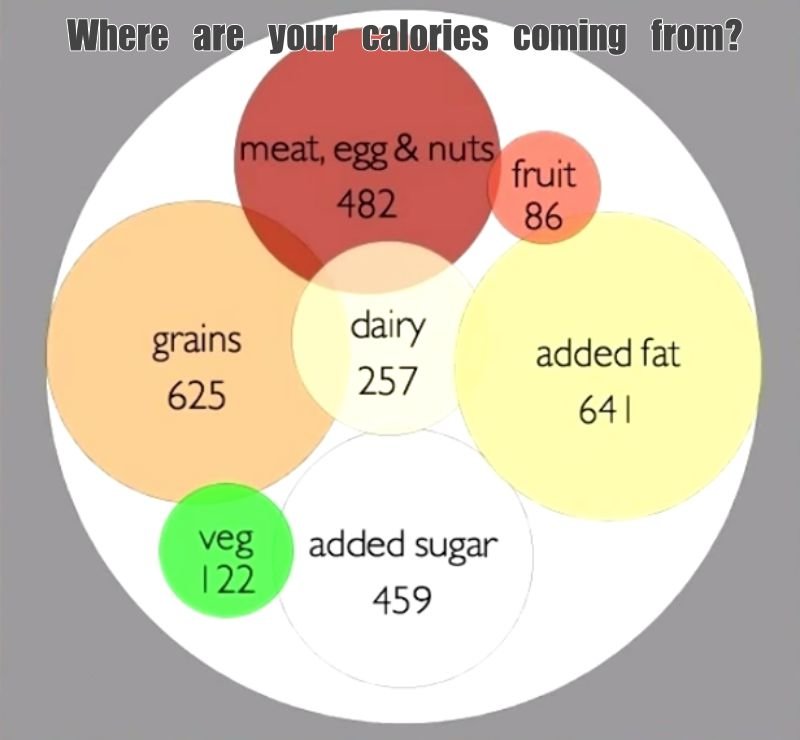 These science-based tips help you get the most out of your workout by exercising correctly, boosting motivation, and fine-tuning nutrition.
Julianne Bodo, CES, PES 1 month ago

The Ultimate Guide To Choosing The Right Yoga Type For You

Suppose you're thinking of getting involved in yoga. But which yoga type to choose? This guide will help you pick the right one for you.
Julianne Bodo, CES, PES 5 months ago