Is Junk Food Addiction As Strong As Drug Addiction?

Do you ever crave foods so much that it hurts? When you’re trying to resist a food, is it almost painful? Do you ever feel like trying to give up certain foods is even harder than trying to quit smocking? Do you sometimes feel like enjoying your favorite foods is even better than making love? Than you have a junk food addiction!

What The Studies Say

Well, some scientists who were wondering those same things did a study called “Addiction-like reward dysfunction and compulsive eating in obese rats“, where they actually looked at rats and their consumption of junk foods and the effect on their brains.

Specifically they examined the D2 dopamine receptor system that is a known mechanism in drug addiction and obesity. They actually found that the consumption of highly palatable junk foods had a similar effect on the brain chemistry as consuming drugs like cocain or even heroin. This study exactly explain why we sometimes feel that we are addicted to foods and why cravings can be so intense.

Scientists also found that compulsive overeating was a side effect of this decreased dopamine activity. This would make sense because over time your body is actually needing more and more of the pleasurable substance to satisfy your craving.

We all know that our brains release dopamine when we enjoy something pleasurable like food or making love. But the alarming thing about the study is that it shows that junk foods stimulate the brain more than regular, natural foods do and that these foods cause a physical change in the brain that results in you being addicted to the foods.

What’s worse is that we’ll have a harder time finding pleasure in other things. This is why a drug addict can become so consumed with their drug, that they’ll even neglect their physical health, their job, and even their family. This would also explain why non junk foods don’t seem as pleasurable or enjoyable as their junk food counterparts.

In 2009 ABC News ran a segment that examined a similar study, where scientists actually found that rats develop such strong junk food addictions that even electric shock would not deter them from consuming the foods.

Let’s look at cigarettes as an example. It wasn’t until 1964 that the surgeon general released their report exposing the hazards of smoking  and they also begin requiring warning labels on cigarette packages and even restricting the advertising that tobacco companies could do.

In the 1950s 44% of the Americans were smokers and by 2005 that number had plummeted to 24% due to the fact that people were more informed about the dangers of smoking.

But there were also a lot of folks who were already addicted by the time that the surgeon general stepped in. So even though they had the information and perhaps even the intention to quit smoking, they now had a physical addiction to nicotine that they had to overcome as well.

To relate it all back to junk food, I’m afraid that America has become so full of junk food addicts that now it’s going to take so much more than just simple habit changes or learning how to cook new things. Luckily, we do have the power and the free will to change our lives, take control over our health and get rid over our junk food addictions.

How To Fight It

The best way to tackle the addictive nature of these foods is to avoid becoming addicted in the first place. So we can actually prevent our children from developing these junk food addictions by only exposing them to natural foods and natural flavors.

Genetics plays a role in how easily you might become addicted to junk foods. But it’s not the genetics who starts the junk food addiction, it’s you! Luckily, we do have the power and the free will to take control of our brains and of our health.

For sugar cravings, it is recommended to replace refined sugar and artificial sweeteners with natural sweeting flavors like agave nectar, honey, brown sugar, and even cinnamon.

Replacing your iodized table salt with a natural sea salt and even spices like rosemary, basil or turmeric can go a long way to curb salt cravings.

Information Is The Weapon

Now maybe it’s just me, but isn’t it kind of disturbing to think that junk foods cause the same addiction-like process in the brain that illegal drug do!? I mean it’s one thing for a restaurant to want you to enjoy their food and become a repeat customer, but if the foods are actually causing physical changes in the brain, shouldn’t there at least be a surgeon general’s warning on this stuff?

“Warning! The food-like substance you’re about to ingest contain chemicals which may be toxic, addictive and which may cause compulsive overeating. These foods may cause you to become depressed and overweight. Please consume at your own risk.

I agree that every person has the freedom to choose what they want to eat, but it’s important that we have all the information before we make those decisions. In medicine, this is called informed consent and it just means that the doctor tells you all the pros and all the cons before you decide whether or not to have a surgery or to begin taking a prescription drug.

Our goal is to give you the facts, give you the data so that you make an informed decision for yourself and for your family.

There are countless YouTube videos and pictures on the internet of fast food which is been sitting out for anywhere from 3 months to 6 years and it has no mold, no evidence of decay, when all of us know that real food is gonna go bad. So it just begs the question: 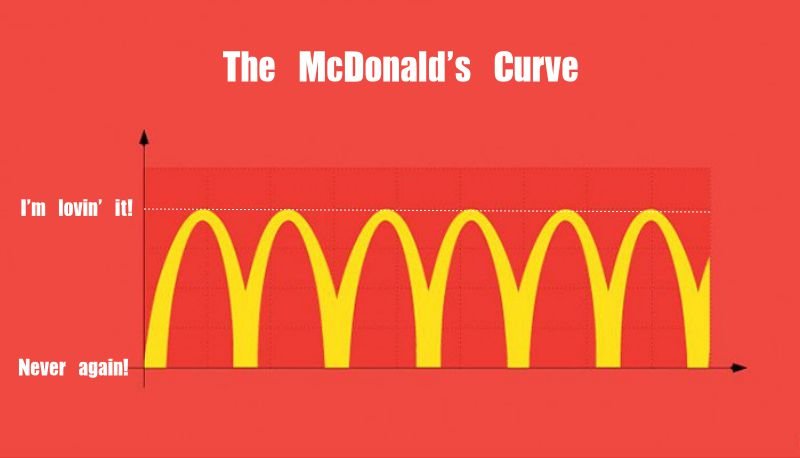 6 Activities That Will Help You Relieve Built-Up Stress

Stress is never good for your body and mind. If you’ve been stressed recently, try these activities that promise to relieve built-up stress.
Julianne Bodo, CES, PES 3 days ago

5 Common Heart Diseases To Be Aware Of

Heart diseases are ailments that affect the cardiovascular system in the body. Here are the most common heart diseases to be aware of.
Mariah Belsore 5 days ago

Adolescents nowadays are exposed to more health risks than ever before. Here are four of the main health risks in young people.
Julianne Bodo, CES, PES 6 days ago

Five Tips For Going Organic On A Budget

Going organic on a budget shouldn't be so scary. There are a few things you can do to easily achieve this healthy lifestyle.
Beth Williams 1 week ago

What Does Medical Insurance For Parents Cover?

If you're not familiar with the medical insurance for parents, here's what this type of health insurance is and what does it cover.
Julianne Bodo, CES, PES 2 weeks ago

These doctors-approved tips for healthy kidneys will help you to maintain your kidneys in top shape. They're also great for overall health.
Beth Williams 2 weeks ago

ED Doesn’t Have To Run Your Life, Exercise Could Be The Solution

Erectile dysfunction is a crippling condition that can impact intimacy, mental health, and more. Here's how exercise can help you with ED.
Beth Williams 2 weeks ago

How To Boost Your Fertility With A Few Lifestyle Changes

There are a few lifestyle changes that can help boost your fertility. These include a healthy diet, proper hydration, and regular exercise.
Beth Williams 3 weeks ago

How To Exercise Your Way To Trauma Recovery

A traumatic event can leave you frightened, confused, and stressed. These trauma recovery tips will help you work your way to recovering.
Julianne Bodo, CES, PES 3 weeks ago

How To Hack Happy Hormones To Boost Your Mood

Everything you do in your day-to-day life has an impact on your mood and happiness. So here's how you can boost these happy hormones.
Mark Norey, CPT 1 month ago