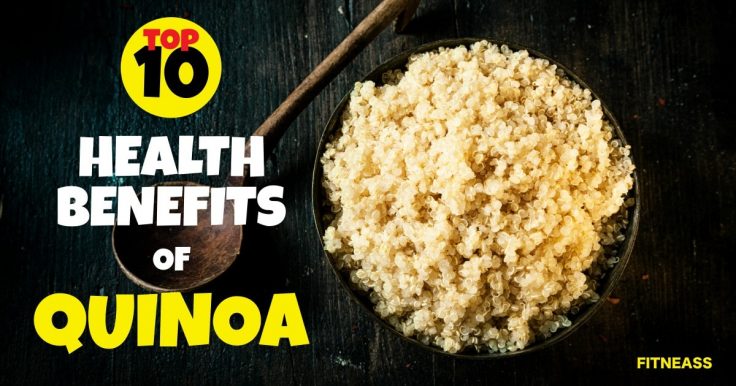 Quinoa is one of the most nutritions foods in the world. It can help you slim down, regulate your metabolism and fight diseases. So let’s find out more about the amazing health benefits of quinoa!

Quinoa is an edible seed which is taken as a dietary staple in South America. It is quite similar to brown rice, regular white rice, and barley.

It’s a food which has got it all, rich in fiber, magnesium, potassium, calcium, phosphorus, Vitamin B, and E plus various other beneficial antioxidants. Also, it’s rich in protein, gluten-free and contains all nine essential amino acids.

Having a lot of nutritional content, quinoa was considered as “mother of all grains” back in the days of Inca Empire in the 16th century.

Quinoa has been popular in health-conscious people nowadays but has been consumed for thousands of years in South America.

This seed is a perfect escape from regular white rice and is a great substitute for oatmeal. Its one cup provides 5 grams of fiber and 8 grams of protein, having just 222 calories.

The year 2013 has been declared as the “International Year of Quinoa” by UN since it played an important role in eradicating hunger, malnutrition, and poverty. (1)

Quinoa serves as an alternative to meet the increased demands of food quality for the countries having food insecurity with relevance to climate change.

It is an easy pick for a diet rich in protein, swapping regular oatmeal with quinoa flakes could be the first step towards a healthy diet.

Here are the top 10 health benefits of quinoa that will make you shift to a quinoa diet:

Quinoa is a seed consumed as grain by health-conscious people. It comes with a total of 222 calories having 39 grams of carbohydrates, 4 grams of fat with a small amount of omega-3 fatty acids.

It’s grown organically and is considered as a whole grain food being gluten free.

Even the NASA scientists have been looking at it as a crop to be grown in outer space, based on its high nutrient content, ease of use and how easy it is to grow. (2)

One cup of cooked quinoa contains the following nutrients: (3)

Quinoa is rich in flavonoids, which are best known for their anti-inflammatory and anti-oxidants health benefits.

Quercetin and Kaempferol are the two flavonoids present in quinoa which benefits the cardiovascular and nervous system. (4)

These flavonoids help to avoid excessive clumping of blood platelets which in turn can lead to unwanted clogging of the blood vessels. They also create an anti-oxidant defense against the free radicals that promote the development of cancer. (5)

Quinoa contains fiber than most of the grains.

A cup of quinoa contains 17 – 27 grams of fiber, which is twice the amount in most of the grains.

Fiber helps in reducing the development of Type II diabetes (7), blood pressure (8), inflammation and helps in maintaining a healthy weight. It also normalizes your energy (9), helps maintain bowel health and lowers cholesterol level in the body.

Quinoa is naturally gluten-free and is a great substitute for typical gluten-free ingredients such as potato, tapioca, corn, rice flour. (10)

It can increase the anti-oxidant (11) and gluten-free value in a diet. A gluten-free diet is beneficial for the ones with the chronic gastrointestinal disorder called irritable bowel syndrome.

Quinoa is rich in protein and has all essential amino acids required for a complete diet. A lot of other plant foods lack a certain amino acid called lysine which helps in protein synthesis, which quinoa has.

Since quinoa has a good amount of protein so it can repair and build tissues fast.

Foods having higher glycemic index increase hunger and cause obesity.

High blood sugar level can cause hyperglycemia, diabetes, dehydration, and other serious complications.

Quinoa is quite rich in minerals; it contains magnesium, potassium, iron, and zinc.

A cup of quinoa has 30% of RDA which is good for heart health, prevents migraine headaches, and relieves muscle aches and spasms.

Since quinoa has a good content of iron, it helps to maintain the adequate iron level in the body. This is essential because it forms an important component in hemoglobin which in turn adds oxygen to our blood.

Quinoa is rich in anti-oxidants which help neutralize free radicals that can cause several diseases like cancer.

Foods rich in anti-oxidants help to fight against aging, and quinoa is one of them.

Researchers at Columbia University’s Celiac Disease Centre found that gluten-free diet’s nutritional content was increased by adding quinoa to it.

One cup of cooked quinoa contains 58 % of the RDA of manganese, which acts as a catalyzing agent in the functioning of enzymes.

Quinoa helps to lose weight by keeping a check on it. Losing body weight can be done either by intaking fewer or burning more calories.

Since quinoa is rich in protein, it increases your metabolic rate and helps increase your muscle mass. As an effect, you’ll lose weight faster, easier, and safer.

Quinoa could become your favorite option as a food because it takes just 5-10 minutes to cook and tastes great, better than rice and millets, plus it has got all essential amino acids.

Since it’s rich in protein, it forms an important part in the diets of vegetarians and vegans. You can:

Here’s a quinoa salad you can try

Hopefully these 10 health benefits of quinoa made you give this amazing seed another chance. And who knows, maybe it’ll be your favourite dish.

Your article is detailed, thanks to it I solved the problem I am entangled. I will regularly follow your writers and visit this site daily.

0
Reply
All the nutritional information, health and fitness tips and advice offered here is solely for educational purposes.
We do our best to research and offer the most accurate information possible, but this doesn't replace or represent any professional medical advice.
For the right diagnosis and treatment you should always consult with your doctor.
Just so you know, Fitneass may receive some compensation from the links on this page.

This step-by-step guide to breastfeeding can help any new or expecting mom in case she's considering breastfeeding her newborn baby.
Beth Williams 5 hours ago

We all know how difficult it can be to get a good night's sleep every night. So follow these steps to wake up feeling rested and refreshed.
Beth Williams 2 days ago

Breast cancer is a terrible disease that affects so many people. Here's what you must know about preventing and fighting breast cancer.
Beth Williams 5 days ago

People need to maintain healthy bones if they want to live long and be able to enjoy their life. Here are 7 top tips to protect your bones.
Julianne Bodo, CES, PES 5 days ago

In this article, we'll talk about leg veins, both spider and varicose veins, their causes, signs, and symptoms, and possible treatments.
Julianne Bodo, CES, PES 6 days ago

Tea is a beverage that has been consumed for centuries. There are many types of tea, each one being a little different from the next.
Beth Williams 1 week ago

6 Important Things To Do To Overcome A Panic Attack

People with panic disorder have recurring and unexpected panic attacks. Here's what you need to know to overcome a panic attack.
Beth Williams 3 weeks ago