The different foods people eat around the world are endlessly fascinating.

We’re curious about the way people eat and which customs are taboo, and what people consider “healthy eating.” We want to know what kids are eating for lunch and what governments are feeding their soldiers.

Photojournalist Peter Menzel and writer Faith D’Aluisio have satiated our curiosity in a new way, breaking down what individuals from all over the world eat in one day. In “What I Eat: Around The World In 80 Diets,” Menzel and D’Aluisio document a stunning array of individuals’ daily sustenance. The subjects of ‘What I Eat’ run the gamut from a coal miner and a call center operator to a sumo wrestler.

The book is arranged by the number of calories each individual consumes. Context from D’Aluisio accompanies each portrait, and essays from food experts such as Michael Pollan appear throughout the book.

On choosing to lay out food consumption at the individual level, Menzel said: “I want people to understand their own diets better — and their own chemistry and their own biology. And make better decisions for themselves.” 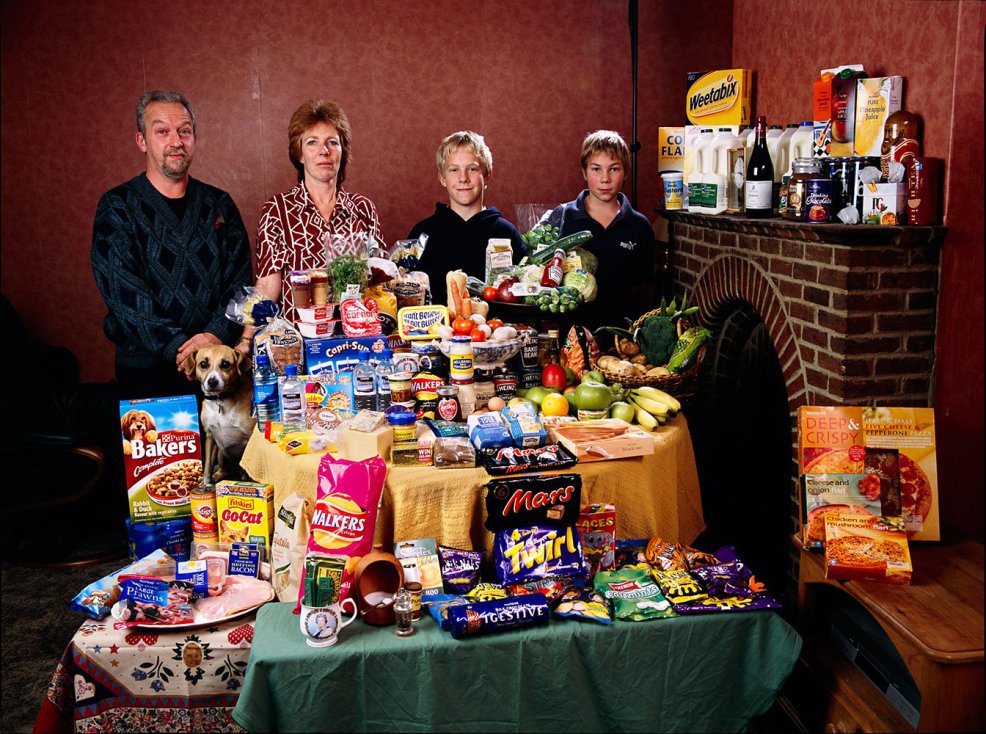 Below are some examples of the 80 portraits found in “What I Eat: Around The World In 80 Diets.”

“Bruce Hopkins, a Bondi Beach lifeguard, with his typical day’s worth of food in Sydney, New South Whales, Australia. The caloric value of his day’s worth of food on a typical day in the month of February was 3,700 kcals. He is 35 years of age; 6 feet tall, and 180 pounds. Hopkins eats moderately, rarely — if ever — eats fast food, and drinks alcohol only when he and his wife go to dinner with friends.” 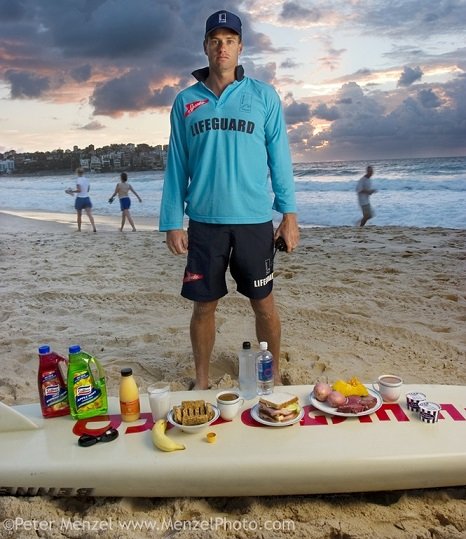 “Sitarani Tyaagi, an ascetic Hindu priest, with his typical day’s worth of food at an ashram in Ujjain, India. The caloric value of his typical day’s worth of food in the month of April was 1,000 kcals. He is 70 years of age; 5 feet, 6 inches tall; and 103 pounds. Sitarani Tyaagi is one of thousands of ascetic Hindu priests — called Sadhus — that walk the country of India and receive food from observant Hindus. Generally, he eats one meal per day and has water for the other two meals. He has a small pot that he carries with him for water. Offer him more food than a plateful, and he will kindly say, ‘no thanks.'” 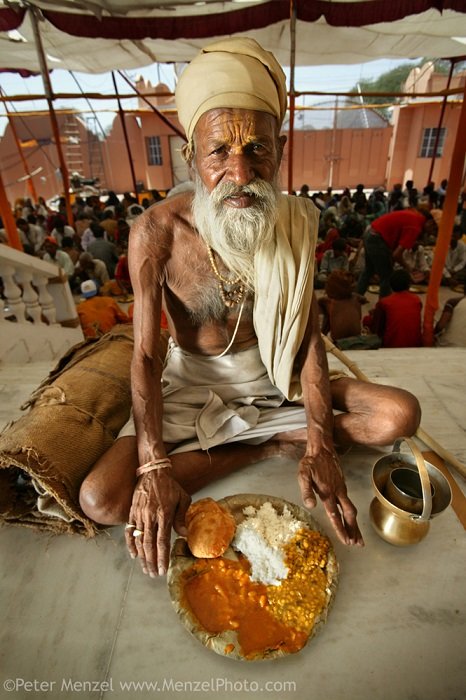 “Curtis Newcomer, a U.S. Army soldier, with his typical day’s worth of food at the National Training Center at Fort Irwin in California’s Mojave Desert. The caloric value of his day’s worth of food in the month of September was 4,000 kcals. He is 20 years old; 6 feet, 5 inches tall; and 195 pounds.

During a two-week stint before his second deployment to Iraq, he spends 12-hour shifts manning the radio communication tent (behind him). He eats his morning and evening meals in a mess hall tent, but his lunch consists of a variety of instant meals in the form of MREs (Meals, Ready-to-Eat). His least favorite is the cheese and veggie omelet. “Everybody hates that one. It’s horrible,” he says. A mile behind him, toward the base of the mountains, is Medina Wasl, a fabricated Iraqi village — one of 13 built for training exercises, with hidden video cameras and microphones linked to the base control center for performance reviews.”

“Mariel Booth, a professional model and New York University student, at the Ten Ton Studio in Brooklyn with her typical day’s worth of food. The caloric value of her day’s worth of food on a day in the month of October was 2,400 kcals. She is 23 years of age; 5 feet, 9.5 inches tall; and 135 pounds. At a healthier weight than when modeling full-time, she feels good but laments that she’s making much less money.”

“Takeuchi Masato, a professional sumo wrestler whose ring name is Miyabiyama (meaning “Graceful Mountain”), with his day’s worth of food in the team’s practice ring in Nagoya, Japan.”

“Shashi Kanth, a call center worker, with his day’s worth of food in his office at the AOL call center in Bangalore, India. He is 23 years of age; 5 feet, 7 inches; and 123 pounds. Like many of the thousands of call center workers in India, he relies on fast-food meals, candy bars, and coffee to sustain him through the long nights spent talking to Westerners about various technical questions and billing problems. He took a temporary detour into the call center world to pay medical and school bills but finds himself still there after two years, not knowing when or if he will return to his professional studies.” 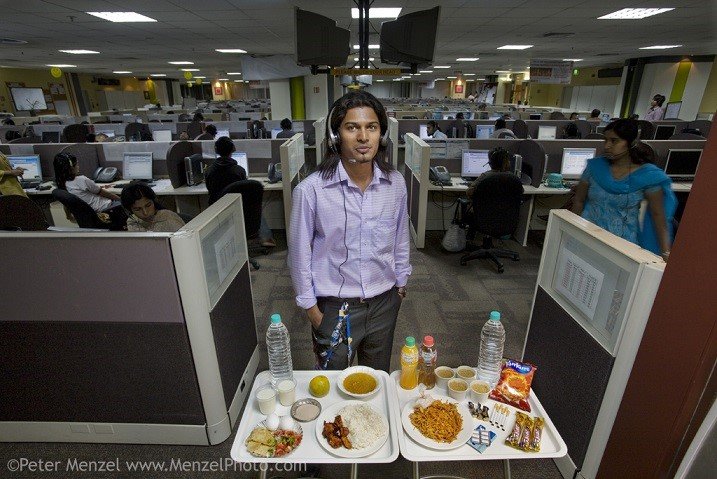 The CrossFit Diet – What Do CrossFit Athletes Eat?

Nutrition is the foundation, CrossFit is the lifestyle. Here all you need to know about the CrossFit diet and what do these athletes eat.
Julianne Bodo, CES, PES 3 months ago

How To Stick To Your Diet Plan To Lose Weight Quickly

When you start a weight loss program, you have to work hard to stick to your diet plan. Here are a few tips to help you achieve just that.
Julianne Bodo, CES, PES 3 months ago

If you're looking for a natural way to boost your energy during the day, consider adding these foods high in energy to your daily meals.
Mark Norey, CPT 4 months ago

A fiber-poor diet is associated with a higher risk of developing diseases such as stroke, type 2 diabetes, and even bowel cancer.
Julianne Bodo, CES, PES 4 months ago

Want to follow the Mediterranean diet plan but don't know where to start? These expert tips should guide you to better health.
Beth Williams 4 months ago

If you're planning on following the ketogenic lifestyle, you must understand the ketosis process and how do ketones work. Here's your guide.
Julianne Bodo, CES, PES 6 months ago

Following a gluten-free diet is mandatory for those suffering from celiac disease or gluten allergies. Here's what you can and can't eat.
Mark Norey, CPT 6 months ago

Wanna go vegan and follow a plant-based diet but the lack of proteins in your meals scares you? Check out these plant-based protein sources!
Julianne Bodo, CES, PES 6 months ago

The Benefits Of Turning To A Plant-Based Diet

People turn to a plant-based diet because it gets you healthy while also preventing animal cruelty and reducing environmental footprint.
Beth Williams 6 months ago