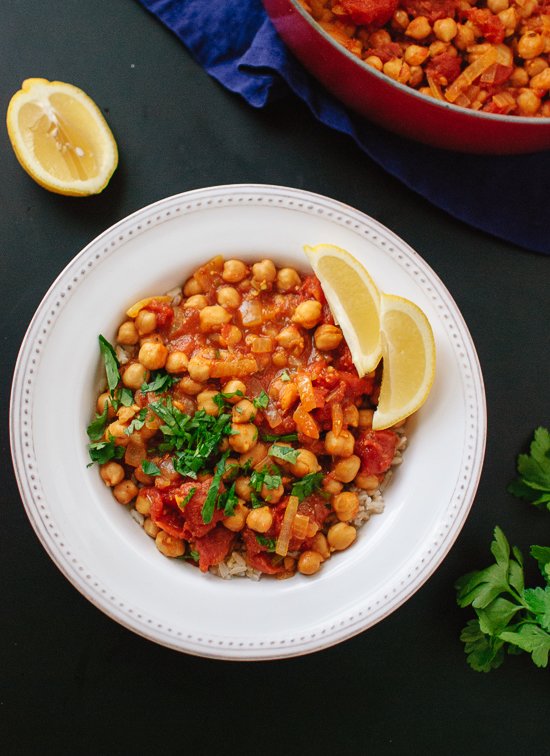 I want to share this vegan chana masala recipe, which is from Angela Liddon’s just-released ‘The Oh She Glows Cookbook’. I’m generally intimidated by Indian cooking because the recipes usually call for a long list of unfamiliar spices, so I was happy when I found Angela’s recipe for quick and easy vegan chana masala in the pages of her new cookbook. The recipe comes together quickly with mostly pantry ingredients, but the end result tastes super fresh.

Vegan chana masala is one of my favorite options at Indian buffets. It’s a hearty, saucy and spicy chickpea and tomato dish, just the type of meal I’m craving while there’s snow on the ground. I thoroughly enjoyed the 20 minutes I spent over the stove for this recipe. Wave after wave of deliciousness hit my nose—first, fried cumin, then onions, ginger and chile pepper, followed by warming spices and stewed tomatoes. I think I’ll start cooking Indian recipes more often.

The only significant change I made to this recipe was using a tikka masala spice blend instead of garam masala. Generally speaking, garam masala has more warming spices, like cloves and cinnamon, while tikka masala has brighter notes of chili powder and paprika. Garam masala is the typical choice for vegan chana masala, but I just grabbed the jar I had in my spice drawer. No twomasalas (a broad term for Indian spice blends) are exactly alike, anyway. I think you’ll be happy with any quality blend.

Quick and easy vegan chana masala served over basmati rice. This spicy, hearty Indian recipe is vegan and gluten free. It makes great leftovers, too! Be sure to prep the ingredients in advance, as the recipe moves quickly. You can prepare the vegan chana masala in a total of 40 minutes. It contains 4 servings. Enjoy!

What We Need For A Vegan Chana Masala?

We feed first with our eyes, not the mouth. So use these tips to prepare appealing healthy food that really looks and tastes irresistible.
Mariah Belsore 2 years ago

These eight low-carb recipes will help you lose weight safely by substituting the carbs from your diet with healthy vegetable options.
Mark Norey, CPT 2 years ago

Chum salmon is packed with protein, omega-3 fatty acids, vitamins, and other nutrients your body needs. So this recipe is super-healthy.
Julianne Bodo, CES, PES 2 years ago

Are you on the ketogenic diet and don't know what to eat anymore? Here are 20 quick and tasty keto snacks to help you diversify your menu.
Mark Norey, CPT 2 years ago

These romantic dinner ideas work best with a glass of white wine alongside. This is how you plan a special night for your loved one!
Julianne Bodo, CES, PES 2 years ago

So you have an instant pot multicooker and want to learn new healthy recipes? Here are six of the most delicious instant pot recipes.
Julianne Bodo, CES, PES 2 years ago

These Are The Best Smoothies For Weight Loss

What To Eat After A Workout? Try These 9 Meals!

Knowing what to eat after a workout can seriously improve muscle gain, speed up recovery time, and boost metabolism. So go for these meals!
Beth Williams 3 years ago

We all know it; chicken soup is the best remedy for a runny nose in the winter. So let's see what's so special about this easy-to-make soup!
Julianne Bodo, CES, PES 3 years ago

Best Smoothie Recipes For The Most Effective Workouts

If you're looking to boost your workout gains, check out this list with the best smoothie recipes to eat before and after your workout.
Beth Williams 3 years ago