How And Why Does Testosterone Deficiency Affect Older Men? 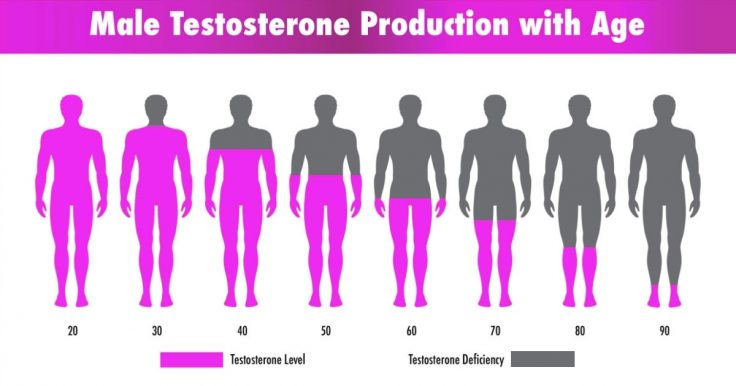 Testosterone deficiency is a big problem for the majority of men over 30. So check out the symptoms of low T to spot it and treat it on time.

Testosterone is commonly known as the “male hormone” which is essential for ensuring a man’s sex drive, but in reality, it is so much more than that.

It helps prevent you from fat gain, depression, low energy levels, a low sperm count, and so much more! It is a vital factor in the health and well-being of a person.

However, the hormone isn’t solely important for males – females need it too.

With that being said, healthy levels of testosterone production are much lower for females than for males. Hypogonadism is the name for when testicles do not produce adequate amounts of testosterone.

There are multiple causes of low testosterone levels.

However, perhaps the most significant of those causes is age – after men reach the age of 30, testosterone levels start to decrease. For some men, this decrease can be considerable.

Taking medication can also negatively affect testosterone production – this is a common cause for older men.

When testosterone levels are sub-par, there are a number of symptoms which can occur.

Below are some of the most common symptoms of testosterone deficiency:

Despite generally being associated with women prior to and during their menopause, many men fail to realize that such sensations can occur to them too.

While women experience hot flashes as a result of a drop in their estrogen levels, the same can happen to men if their testosterone levels drop low enough.

Most men retain enough testosterone to prevent this from happening, even in old age.

However, this is not the case for everyone, and a few men do suffer from this.

If you have experienced this, as a male, as well as experiencing other symptoms on this list, then there is a high chance that you are suffering from testosterone deficiency.

Although research in this area has not been extensive, there are a few reports that suggest that testosterone deficiency can make one more likely to get Alzheimer’s disease later in life.

Overall, the potential risk of Alzheimer’s is a common reason why males undergo testosterone replacement therapy.

This is one of the most common symptoms of testosterone deficiency. It is also one of the main reasons why people seek to increase their testosterone levels, especially those who are body-conscious.

Testosterone acts to suppress fat gain, meaning that with less testosterone, you are prone to increase your body fat.

Increased body fat (being a cause of hypogonadism) will, in turn, further reduce testosterone production levels. And hence, the spiral continues.

Having low testosterone levels, however, doesn’t mean that you’re necessarily going to put on fat. It simply means that it’ll be easier for you to do so.

This is probably one of the more obvious symptoms of depleting testosterone levels, and it regularly happens as you age.

Testosterone deficiency often results in a lower sperm count, and can thus leave the man highly infertile by old age. This factor is extremely important if you are considering having a child.

Infertility can be extremely emotional, and often detrimental to a relationship. For that reason, many men seek to improve their testosterone levels, often through testosterone replacement therapies.

Adequate levels of testosterone are extremely important for your emotional well-being, which is often something that people overlook.

However, testosterone deficiency can often lead to a regular period of sadness, and depression. It is also often cited as a factor in causing social anxiety.

People who work to increase their testosterone levels tend to experience a relief in such factors.

When aging, men tend to lose many of their “masculine features”, such as muscle mass and body hair. The reason for this is due to men’s gradual reduction in testosterone levels past the age of 30.

Testosterone is one of the most significant factors regarding growing body hair and building muscle mass – this is perhaps why it is referred to as “the male hormone”.

As a result, the defining “male features” tend to dissipate.

If the above symptoms relate to you, then there is a good chance that you are suffering from low levels of testosterone production.

The above list is not exhaustive, however, as there are multiple other effects that testosterone deficiency may have on you, such as sleep disturbances, and according to some experts, heart issues.

There are a few different methods to increase your testosterone levels, such as by eating certain foods, exercising regularly, taking nutritional supplements, or even through testosterone replacement therapy.

In order to read more about the causes of low testosterone production, its symptoms, and testosterone replacement therapy, check out BalanceMyHormones.co.uk.

Stretch marks are a type of scars that occur all over the body for different reasons. Genetics is the major factor that causes stretch marks.
Mark Norey, CPT 8 years ago

Do you know what the major enemies of your skin are? Skin problems occur because our fault, because of what we eat. Acne appear after a poor nutrition.
Mark Norey, CPT 8 years ago

Did you knew that cucumber has 96% water content, can regulate blood pressure, and can cure digestive disorders? But there's more...
Mark Norey, CPT 8 years ago

Did you ever think about what gives the color to the food? Here are some useful things that you didn't know about the food color.
Mark Norey, CPT 8 years ago

Do we know how to combine our foods for a healthy eating plate? Here is the answer: some balanced servings of grains, meat, veggies and fruits.
Mark Norey, CPT 8 years ago

If you eat enough fruit for breakfast you will not require a coffee as the natural fruit sugars keep the brain sharp and energized.
Mark Norey, CPT 8 years ago

Choosing healthy foods in your diet is not an easy task, and it is not well mastered by many people. So here are some healthy food myths.
Mark Norey, CPT 8 years ago