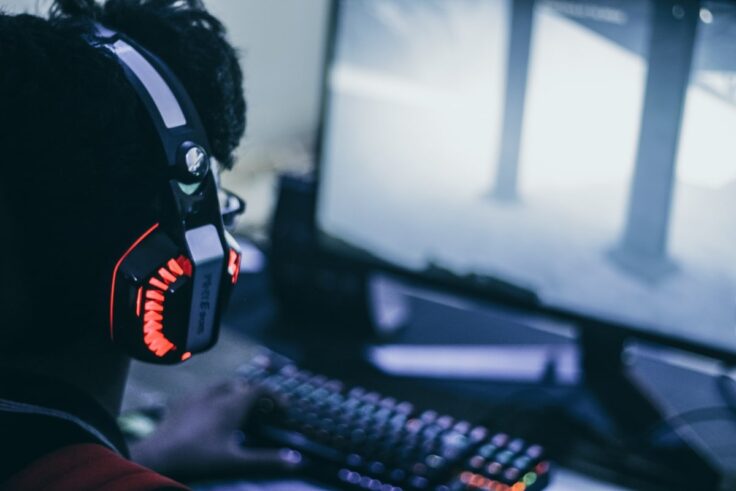 Exercise before; stretch, hydrate, and snack healthily during. These are simple things you can do to stay fit during online gaming.

It’s said that over 2.6 billion people now play games online, making it one of the most popular pastimes on the planet.

Still, while those partaking in gaming are enjoying the experience, it’s not conducive to maintaining good health.

Online gaming sessions can see players sitting at their desks for hours, which can lead to various problems such as being at a higher risk of obesity with poor eating habits.

Also, it can lead to multiple physical ailments such as repetitive stress injuries to muscles and tendons.

The Rise Of Online Gaming During The Pandemic

The above issues have been magnified during the pandemic, as more of us were forced to stay at home, which led to over 500 million new gamers logging on, according to Euronews.

It’s not just one gaming genre that has raised its numbers of players either; new online gamers have discovered much more than just first-person shooters and World of Warcraft.

More people also watched others enjoy their gaming sessions online, as viewer numbers on the streaming platform Twitch grew by 50%.

Meanwhile, Poker.org noted that online poker filled a void for those who were locked out of their favorite entertainment venues with those wishing to play poker turning to online tournaments.

That might have been in one of the five states with legalized money games, or playing purely for the social aspect on free-to-play titles such as Zynga.

Many of these new poker players turned to their mobiles for gaming and they weren’t alone; the pandemic brought on a 75% increase in people playing games on their phones.

What’s just as remarkable is that industry experts from IDC, suggest that those numbers won’t drop, even though we’re now coming out of the other side of the restrictions.

While online gaming continues to rise, the associated health risks remain and will be prevalent in more people’s lives.

If you’re one of the players who’ve only recently headed online, read on to discover how you can level up your health and stay in the game.

Here are six simple tips to help you stay fir during online gaming:

Partaking in a ten-to-fifteen-minute exercise session in the morning helps keep you feeling fresh for the rest of the day.

Exercise releases the feel-good chemicals in your brain called endorphins, which can aid focus and keep you optimistic. If you’re in a better mood, then you’re more likely not to suffer a bad beat online.

Consider treating a quick session as the key to unlocking your door to the online world. Set yourself a target of a ten-minute run or something such as 30 sit-ups before you log on to your favorite game.

As we’ve already alluded to, long gaming sessions can put pressure on your joints, so you must stretch.

Stretching keeps your body flexible and improves mobility and stability, as well as aiding blood circulation.

While this can help you up the ante over your gaming opponent on-screen, it’s also something else that can help those who regularly work at a desk, too, as we’ve previously covered in this article.

Every video game title will have a moment of downtime, such as when you’re switching between game lobbies; use it to your advantage.

Another huge growth area in gaming has come in the number of people who like to immerse themselves in the world of virtual reality.

However, the titles aren’t all ones that thrust you onto the frontline of battle or sit gamers in control of a fast car because there are so many games on the various platforms built around fitness.

By downloading one of these titles, and challenging your friends to beat your score, you’re doubling down on both your gaming and fitness regime.

Staying hydrated is the easiest thing you can do if you want to get healthier.

When you drink enough water, you boost your brain performance, increase your energy level, and also lower your calorie intake.

So have a big bottle of water and a cup next to you and drink a few cups while at the computer. This way you will stay hydrated and maybe even perform better.

If you want to stay fit during online gaming you need to pay attention to your snacking habits.

Instead of the usual sugary (and unhealthy) treats, try some of the following examples of healthy snacks:

Make sure that next time you sit at your desk you have something healthy to snack on. It will boost your mood, aid digestion, and help you stay fit and healthy in the long run.

Players will often commit hours to get past the most arduous challenges, such as defeating that level-ending boss or leaping to that highest ledge to unlock a secret room.

It’s entirely possible to apply that same dedication to an exercise routine. And if you commit yourself to your health and fitness, in the same manner, you do to your digital hobby, you’ll reap the rewards.

It’s great to unwind and play online games from time to time. There are even professional gamers that spend most of their time playing online games.

That’s okay as long as you take regular breaks and do some sort of exercise.

So make sure to do your workout before starting your gaming session and take regular breaks to stretch your entire body.

How To Make Healthy And Quick Lunches For Work

When you’re always on the move at work it can be hard to take the time and prepare yourself some healthy and quick lunches for the week.
Mariah Belsore 6 years ago

5 Ways The Right Mattress Can Revolutionize Your Life

We spend a third of our lives asleep and that means we have to choose the right mattress, the one that's comfortable and supportive.
Mariah Belsore 7 years ago

Here's what happens right after drinking coke, and this applies to pretty much most caffeinated soft drinks, not just Coca Cola!
Mark Norey, CPT 7 years ago

How To Drink More Water To Stay Hydrated

The best thing you can put in your body above all else is something many of us don’t get enough: water. Here's how to drink more water.
Beth Williams 7 years ago

Here is a great compilation of hilarious videos with adorable pets interrupting yoga. I found this funny and wanted to share this video with you
Mark Norey, CPT 7 years ago

I will show you how to make it easier for you to get abs by easing your way into cooking healthy food with these essential kitchen items.
Mark Norey, CPT 8 years ago

The Pros And Cons Of Wearing Headphones In The Gym

Here’s a list that covers some pros and cons of wearing headphones in the gym, which shows both aspects of this matter, so that you can choose sides.
Mark Norey, CPT 8 years ago

These healthy traveling tips will maintain your level of fitness while traveling, without feeling like you’re restricting or like you’re missing the fun.
Mark Norey, CPT 8 years ago
Popular

Ever wondered what you can achieve with a bit of enthusiasm and a bottle of vodka? Weird fitness equipment we really, really don't need!
Mark Norey, CPT 8 years ago

Good news! Ice cream isn't as bad for you as you might think. Want to know what other guilty pleasures aren't so bad after all? Read on!
Mark Norey, CPT 9 years ago