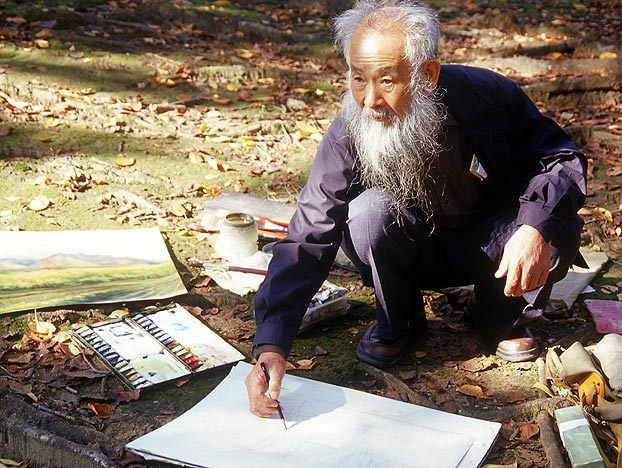 Seniors from the Japanese island of Okinawa has one of the lowest mortality rates in the world, causes that occur with normal aging, and chronic diseases. The ancient Chinese legends related to small island of Okinawa as “land of happy immortals” and nowadays there are living most of the centenarians in the planet.

Life expectancy is 81.2 years in Okinawa – the largest in the world! Okinawan centenarians say their secret is a specific diet. Let’s discover it together!

Researchers began studying centenarians in Okinawa since 1975, when they founded The Okinawa Centenarian Study (OCS). People over 100 years in Okinawa are not only enduring, but as scientists say they have an extraordinary health condition – are sleek, energetic, have a youthful appearance and does not suffer almost no cardiovascular disease or cancer. Japanese elders say their diet is rich in vegetables and without much meat. This is the secret of this amazing phenomenon of longevity and good health until old age.

This unusual concentration of people over 100 years in one of the area turned up a lot of researchers eager to discover the secret of “eternal youth”. Over more than 25 years of study, it was found that people in Okinawa have very different habits of Europeans or Americans and it can be the secret to their longevity. For example, they drank at least six cups of green tea every day and have a diet based on rice, tofu, bamboo shoots, seaweed, various pickled vegetables and very little meat.

“The people of Okinawa have a decreased risk of atherosclerosis and cancer of the stomach, and a small risk of suffering from hormone-dependent cancers such as the breast or prostate. They eat three servings of fish per week, more whole grains, legumes and soy products, tofu and more konbu seaweed than any other inhabitants of the planet, as well as squid and octopus – rich in taurine, which can reduce cholesterol and blood pressure . “- Dr. Craig Wilcox, co-author of” The Okinawa program “.

What is really fascinating is that the people of Okinawa are active and looks decades younger than they actually are. Over 600 of the residents of Okinawa have reached the second century of their lives. They reached the age of 115-116 years, many of them without major disabilities. Scientists have discovered certain genes explains the longevity and older age of some of them, despite a personal history marked by obesity or smoking.

Researchers are studying at this moment these longevity genes and lifestyles of centenarians in Okinawa, and in Sardinia, Nova Scotia (Canada) and the Caucasus (Russia). Examining over a million variations of genes, researchers hope to find the formula that people get to live good and healthy to more than 100 years. We already know what to do for most people over the age of 85 years – to quit smoking, play sports, have a balanced diet and manage the stress. But scientists go further and want to know what to do to get around us as many super-centenarians (people over the age of 110 years!).

Okinawa Diet does not consider only what you eat, but how. People there have a culinary philosophy called hara hachi bu, which is eight parts of a whole 10. Basically, just eat enough to feel satiated and 80% never exceed 1,800 calories per day.

Indeed, genes can not be changed, but you can make changes in your life and your family to help you live longer and healthier. Seniors in Okinawa do much exercise and remain active until very old age. Their diet is exemplary and follow all the advice we hear them every day in the media: do not eat much sugar and no salt and eat more fruits and vegetables (high in fiber and antioxidants). In addition, consume more soy (rich in flavonoids with antioxidant) than any other inhabitant of the planet – 60-120 g per day, compared to 30-50 g for the remaining Japanese and 10  for Chinese.

You are wrong. They hardly ever eat gluten .

Vote Up0Vote Down  Reply
All the nutritional information, health and fitness tips and advice offered here is solely for educational purposes.
We do our best to research and offer the most accurate information possible, but this doesn't replace or represent any professional medical advice.
For the right diagnosis and treatment you should always consult with your doctor.
Just so you know, Fitneass may receive some compensation from the links on this page.

Food Labels And The Most Common Lies On Them

The biggest food label lies are very often encountered by us, but we do not realize this. Often the label make you buy a product. Read the biggest lies...
Mark Norey, CPT 7 years ago

How To Arrange Your Food In The Refrigerator

Even the way you arrange your food in the refrigerator can turn into a real art. Everyone wants maximum efficiency in handling the food they consume.
Mark Norey, CPT 7 years ago

Do we know how to combine our foods for a healthy eating plate? Here is the answer: some balanced servings of grains, meat, veggies and fruits.
Mark Norey, CPT 7 years ago

If you eat enough fruit for breakfast you will not require a coffee as the natural fruit sugars keep the brain sharp and energized.
Mark Norey, CPT 7 years ago

Choosing healthy foods in the diet is not a very easy and not very well mastered by many people. The food you thought it was healthy, actually isn't.
Mark Norey, CPT 7 years ago