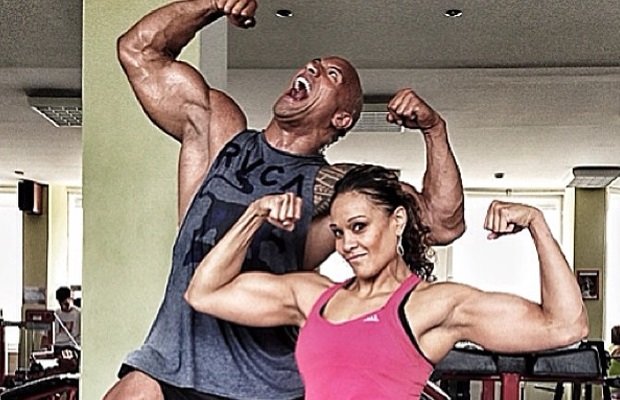 Dwayne “The Rock” Johnson is what you would call a mountain of a man. His recent movie Hercules showcases his amazingly well-built body, which makes everyone wonder what his Hercules workout is. Although the actor has been training his physique for most of his life, even he admits that his Hercules workout was tough. But as the saying goes, where there’s a will there’s an opportunity to look like The Rock  so let’s have a look at his routine in preparation for his big role.

His Hercules workout regiment consisted of 6 to 7 days of workouts per week, for 6 months. His workouts always started with about 50 minutes of treadmill cardio (or sometimes other kinds), and then heavy lifting. The lifts focused on muscle groups, and he worked everything once a week, except legs, which got a special double take each week.

For his back Hercules workout, Dwayne Johnson did pull ups to failure four times, followed by one arm dumbbell row and hammer strength two arm row. Close grip pulldowns followed, and then cable rows. Then came a superset of rope pullovers and rope high row, and at the end some dumbbell shrugs. And by “some”, of course, I mean 4*12, at weights that would scare most.

These 5 Pilates exercises for runners can help you gain flexibility, reduce the chance of injury as well as improve your running form.
Julianne Bodo, CES, PES 8 months ago

The Best At-Home Leg Workouts For Everyone

So you want a successful leg day? You’re welcome. These five at-home leg workouts will help you tone and tighten your entire lower body.
Beth Williams 8 months ago

Many things have changed over time, but exercises that work aren't one of them. These old school resistance band exercises still do the job!
Julianne Bodo, CES, PES 9 months ago

If you're looking to increase muscle strength at home, you CAN'T skip these ten tips that'll boost the outcome of your strenuous workout.
Mariah Belsore 9 months ago

BCAA Benefits For Bodybuilders And Sportsmen

Whether you're a professional athlete or a bodybuilder, you should take advantage of the BCAA benefits. Here's what they can do for you.
Mariah Belsore 9 months ago

Everything You Need To Know About Clomiphene

Male bodybuilders use clomiphene as a safe and effective way to avoid those nasty side effects of using anabolic steroids or SARMs.
Beth Williams 10 months ago

What Are Some Popular SARMs That Really Work

Have you ever considered taking some popular SARMs to bulk up faster? Here's what to know about these supplements and top options for you.
Beth Williams 10 months ago

If you’re a bodybuilder, knee valgus is a term that you may not know yet but it’s one that you don’t want to hear. Here's everything on this.
Mariah Belsore 12 months ago

Get Rid Of The Quarantine Fat With These Exercises

So this lockdown got you out of shape? No worries. You can get rid of the quarantine fat and get back in shape with these full-body exercises.
Mark Norey, CPT 1 year ago

How To Stay In Shape When You’re Practicing Social Distancing

Social distancing does not mean you have to transform yourself into a couch potato. You can still work out even during the global quarantine.
Beth Williams 1 year ago