Healthy Fast Food And Drive-Thru In The Future? 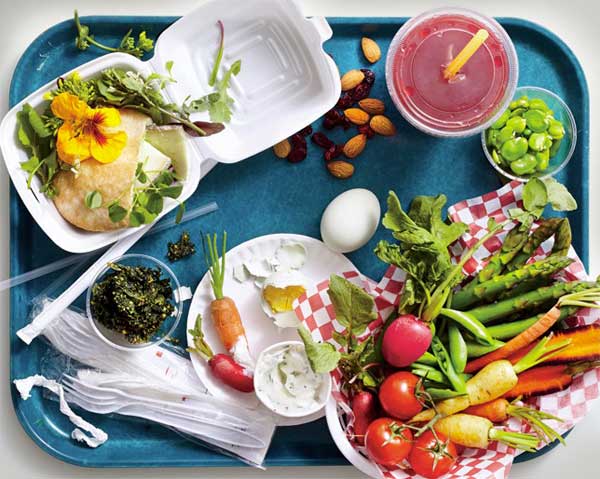 Eating on the run is incredibly common. And someday soon, it may actually be good for you.

You might expect that nearly a decade after documentaries like Fast Food Nation and Super Size Me, drive-through orders would be on the decline. But last year, Americans dropped a cool $179 billion on fast food—more than double what we shelled out for weight-loss products the same year.

This lack of cheeseburger backlash is partly due to American schedules, which, like American stomachs, show no sign of getting any less jammed. Cooking is a chore that eats into our leisure moments three times a day and is easily outsourced. That may be why the U.S. ranked at the very bottom, in a 2011 report of 28 countries, in both the percentage of people who cook and the amount of time they spend doing it. (Perhaps not coincidentally, the only place we bested most other countries was in our obesity rate.) In a separate survey, 19 percent of respondents described themselves as “fast-food junkies.”

So if we can’t quit fast food, can we at least combine convenience with something healthier than deep-fried potato sticks and fatty, factory-farmed meat? Plenty of chains are doing just that. And in the not-so-distant future, the person who takes your order may well be asking, “Do you want kale with that?”

Consumers call for healthy fast food options has not gone unheeded. Certain national chains, including Panera Bread and Chipotle, use antibiotic-free meat, and many chains are phasing out factory-farm suppliers. But other healthy strides have famously flopped (or drawn criticism): whole-wheat doughnuts, oatmeal, “french fries” made from fruit. That may be because there is a discrepancy between what consumers say they want and what they actually buy, says Mary Avant, associate editor of QSR, a magazine for the quick-service restaurant industry. “Taste is still the main driver,” she adds, “and people don’t want a really healthy product that doesn’t taste great.”

The problem may go even deeper than that. Gavan J. Fitzsimons, Ph.D., a professor of marketing and psychology at the Duke University Fuqua School of Business, studied how people ordered food from sample menus. Somewhat alarmingly, he found that most people were more likely to choose something unhealthy when the menu included one healthy pick. Fitzsimons calls it “vicarious goal fulfillment,” in which the mere presence of a virtuous choice can subconsciously satisfy our impulse to eat well. “Put a healthy option out there and it lures people in, but they don’t end up choosing it,” he says.

Not to mention that “healthy” doesn’t always equate to “low-cal.” Organic and whole-grain are desirable attributes, but neither precludes a menu item from having more than a third of your daily recommended calories. (In a recent analysis of fast-food purchases from six U.S. chains, the average meal contained 836 calories.) “Just because it’s healthy doesn’t mean you can’t gain weight from it,” says Jim White, R.D., a spokesperson for the Academy of Nutrition and Dietetics.

The tide may be turning as a growing number of health-minded quick-service restaurants are spreading across the country. The East Coast burgers-and-wraps chain Energy Kitchen and its no-item-over-500-calories menu can now be found in four states and Washington, D.C. Veggie Grill, a meat-free mecca, expects to double its store count by next summer. New York’s Bareburger serves up organic beef in three boroughs, and Evos, in the South, offers air-baked fries with half the fat of traditional ones.

Offering a core menu of convenient, body-conscious choices, rather than one lonely option in a sea of temptations, can help push people to eat better, says Fitzsimons. “We’ve found that when at least half the items on a menu are pretty good for you, the healthy item doesn’t pop out and you don’t get that ironic backlash,” he says.

But can a fast-food diet ever really help anyone lose weight? And can it taste good enough to stay competitive in a burger-and-fries market? Stephen Sidwell, cofounder of California’s Lyfe Kitchen, believes the answer to both questions is yes. After all, his restaurant’s entire menu of 600-calories-or-fewer entrees is based on dishes that helped him lose 30 pounds. “There is a significant myth that in order to eat healthy, you have to sacrifice taste,” he says. “But it can taste amazing and it can be really filling.”

If Sidwell realizes his goal to take the chain nationwide, he’ll be providing a valuable alternative to thousands of people with the same dietary dilemma he once faced himself. Whether or not the world will ever see a “Quinoa Crunch Wraps—Over 1 Billion Served” sign, well, that’s up to you.

What Foods You Can Eat Before And After Workout

Everyone knows that athletes must plan their meals carefully in order to get the performance. But what should we eat before and after workout?
Mark Norey, CPT 9 years ago

Eggs en cocotte is an easy, delicious breakfast dish made with a few simple ingredients. It's the perfect answer to that "what to make?"
Mark Norey, CPT 9 years ago

To maintain a fine silhouette and a good health, eat plenty of the summer seasonal food. Here you will find the top 10 summer foods for your silhouette.
Mark Norey, CPT 9 years ago

Love Your Body | Enjoy A Serving Of Happiness

From a positive attitude to eating quality, all these details will guide your steps towards a single destination - love your body.
Mark Norey, CPT 9 years ago

There are many factors that control the eating habit. Feeling hungry and tend to eat too much food depends on your behavior.See what makes you eat too much!
Mark Norey, CPT 9 years ago

This recipe of ahi tuna salad does call for a couple of unique ingredients you may not necessarily have on hand, but you can buy them at all grocery stores.
Mark Norey, CPT 9 years ago

If you have children who give exam this year, their stress level will be increased. Here's how you can help your kids with a healthy nutrition.
Mark Norey, CPT 9 years ago

Full of flavor and ripe in the sun, August tomatoes are both a gustatory pleasure, and an ingredient for a healthy weight loss diet - tomato diet.
Mark Norey, CPT 9 years ago

This summer you must know how to get an uniformly tanned skin, to keep your tanned skin as long as possible and how to maintain your skin's health.
Mark Norey, CPT 9 years ago

5 Reasons To Introduce Bananas In Your Daily Meal Plan

Bananas are important sources of vitamin B6, vitamin C, potassium, magnesium and fiber. Here are 5 reasons why you should start eating them.
Mark Norey, CPT 9 years ago