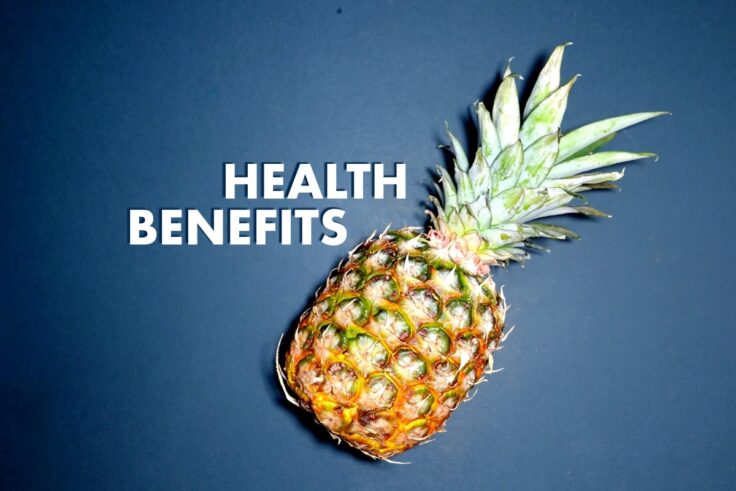 The health benefits of pineapple are as surprising as its weird and unique look. So here are 15 ways to benefit from this delicious fruit.

Pineapple, according to the Cambridge English Dictionary is a large-sized tropical fruit that has a rough orange or brown skin as well as pointy green leaves on top.

This fruit, which has the Latin name Ananas comosus is widely used for culinary purposes all around the world.

It has seen appearances as cooking ingredients in salads, side condiments, savory dishes such as in pizzas plus hamburgers, snacks, cocktails such as the pina colada, juices, or simply served on its own.

In this article, we will learn more about other things related to the pineapple including its 15 health benefits.

The growth and development of pineapples are unique in terms of being grown in soil, not from seeds or trees. Pineapples grow on soil, sourced from its leafy plant.

Meanwhile, the plant itself is composed of thick yet slightly pointy leaves whose growth revolves around a central stem.

The plant, which will eventually be the pineapples’ leaves later on eventually grows into the shape of a sword, and could be as long as 1.5 m.

In the meantime, the fruits grow downwards inside the soil, revolving around the stem.

Pineapples take 24 months or 2 years to grow into a whole fruit at ideal (warm) temperatures or even longer in colder climates.

According to the data by the United Nations Food and Agriculture Organization, the top six pineapple producing countries in 2016 were:

Here are the nutritional facts of pineapples, as sourced from the United States Food and Drugs Administration data:

The daily values (DV) presented are in relation to a 2,000-calorie diet. The amount may change according to the number of calories needed.

The Health Benefits Of Pineapple

Besides being a sweet tasty fruit, pineapple is also incredibly beneficial for your overall health. Here are 15 health benefits of pineapple:

Now take a look at the nutritional facts above, the information says that pineapples are composed of vitamins that fulfills much more than the recommended daily value at 131%.

This makes the pineapple to be exceptionally rich in vitamin C which is needed by our body as an antioxidant.

2. Provides Support For The Immune System

The immune system can be upkept thanks to pineapple’s more-than-enough vitamin C content.

Vitamin C inside pineapples provides support for the immune system by fighting off cell damages caused by free radicals.

At the end of the day, a wide range of diseases, from the light ones up to chronic ones.

Pineapples also support bone growth through the presence of manganese. Aside from calcium, manganese is also important to build strong bones plus connective tissues.

Manganese inside pineapples accounts for 75% of the recommended daily value.

So, apart from drinking milk, it also turns out that consuming pineapples also help to strengthen the bones.

Macular degeneration is the loss of vision caused by the build-up of fat underneath the retina, symptomized by the blurriness of eyesight.

Laura Flores, a nutritionist from San Diego, quoted that pineapples help reduce the risk of macular degeneration thanks to its vitamin C and antioxidant reserves.

Bromelain, which is found on the pineapple’s cores, also helps reduce inflammation, cancers, and tumors.

Common to various fruits, vegetables, or other sources of vitamins and minerals, the dietary fibers of pineapples also promote healthy digestion.

Dietary fibers make the intestines as well as digestion healthy yet effective. In addition to dietary fibers, pineapples also contain bromelain that breaks down protein.

According to the American Cancer Society, bromelain is possible in enhancing digestion.

7. Reduces The Risk Of Blood Clotting

A blood clot is the clumping of red blood cells, which makes its state turn from being liquid to a gel-like texture.

One famous example of blood clotting is deep vein thrombosis (DVT), which happens deep inside the vein of the legs.

The bromelain contents of pineapples are also able to prevent this from happening.

Common cold can be cured with the help of pineapples, again due to its two most vital compounds; bromelain as well as vitamin C.

These two helps to remove phlegm, clear the throat, and reduce mucus inside the nose.

Pineapple in treating cold gets even better if the cold is accompanied by coughing.

And the best part of it is that pineapple as a way for reducing sinus and mucus is absolutely safe for allergic people.

9. They Are Also Anti-Cancer

The anti-cancer potentials of pineapples are also attributed to their anti-inflammatory properties as well as antioxidants.

On the other hand, pineapples also contain minerals that help guard the body against cancer, such as manganese, vitamin A, as well as bromelain.

Asthma is a condition in which a person’s breathing airways become narrow, inflamed, and swell in such a degree that it produces mucus and phlegm, which makes it difficult in breathing.

Since asthma is an inflammatory disease, it can be treated using vitamin C, bromelain as well as beta-carotene; all of them are anti-inflammation present inside pineapples.

In terms of blood pressure, potassium relaxes the blood arteries to lead a less-restricted flow of blood circulation all over the body.

At the end of the day, hypertension can be anticipated at best.

Simultaneously, a good flow of blood circulation can be achieved through copper, which supports the formation of red blood cells.

12. Protects The Heart From Diseases

Heart diseases or cardiovascular diseases are among the most fatal diseases around.

Diseases such as strokes, atherosclerosis as well as cardiac arrest can be prevented thanks to potassium inside pineapples that prevent blood clots and accumulation of plaques inside the blood vessels as well as arteries.

Who would ever think that pineapples are also able to be used as natural skincare? It is possible because of vitamin C, an antioxidant that maintains and rejuvenates the skin.

Vitamin C also leads to the creation of collagen to achieve healthy skin. Finally, acne, skin damage, wrinkles, and aging are nothing to worry about.

Diabetes is a series of diseases that happen due to excessive blood glucose content. Pineapples, since they are rich in fiber is deemed extremely safe for diabetics.

For type 1 diabetes patients, pineapples help in lowering down blood glucose levels. Whereas in type 2 diabetes, pineapples improve the levels of insulin and blood sugar

15. It Contains Antioxidants That Offer Various Benefits To The Whole Body

In conclusion, the antioxidants of the pineapple, which are mostly in the form of vitamins and minerals offer holistic care to the body, with each antioxidant having their own specific roles.

Pineapples are one unique fruit, be it from how it looks like and also how it is cultivated. But then, behind the weirdness of this fruit, have you realized the health benefits of pineapple?

If you're looking for simple ways to stay healthy mentally, physically, and emotionally, here are seven straightforward pieces of advice.
Julianne Bodo, CES, PES 1 month ago

How To Reduce Cholesterol Without Medication

These lifestyle changes can help reduce cholesterol naturally, without any medication, and make you feel healthy and vibrant again.
Mariah Belsore 1 month ago

How To Keep Germs Out Of Your House

Whether it’s a pandemic or the seasonal flu, germs can wreak havoc on your family. These tips will help you keep germs out of your house!
Beth Williams 1 month ago

Can You Prevent Type 2 Diabetes Naturally?

The power of nature is all around you, and here are some of the most impactful natural plant remedies that have science on their side.
Julianne Bodo, CES, PES 2 months ago

Cancer is one of the deadliest diseases mankind ever faced. But thanks to modern discoveries, it can be controlled and even cured.
Mariah Belsore 2 months ago

The Novel Corona Virus, or Covid-19, is profoundly affecting our lives and the risks and health concerns due to the pandemic are numerous.
Julianne Bodo, CES, PES 2 months ago

6 Important Tips To Help You Recover After A Car Accident

An accident can leave a physical and mental trauma to your overall health. So it's very important to properly recover after a car accident.
Beth Williams 2 months ago

The number of websites selling CBD products can feel overwhelming. Here's what you need to know before purchasing CBD from an online store.
Beth Williams 2 months ago