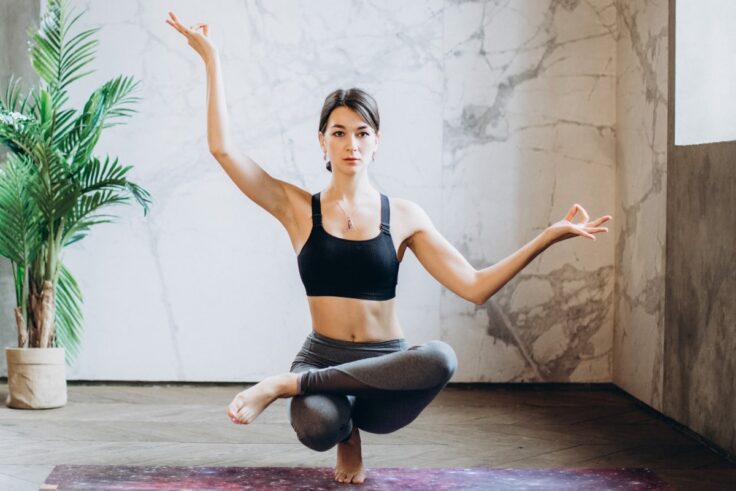 All yoga poses are full of benefits, but if you need to decide between Hatha and Vinyasa yoga, you must consider their particular advantages.

Styles of yoga vary in terms of pace, practice, goal structure, and intensity. If you are on the hunt to expand your yoga practice or searching for a style that best suits you, chances are you are yet to exhaust your options when it comes to types.

If you are familiar with yoga, you’ve probably heard about the two most popular forms: Hatha and Vinyasa.

Hatha yoga serves as a gentle introduction to yoga practice. It typically consists of many common forms of yoga practices.

A great example of this would be the Iyengar yoga, a form developed by BKS Iyengar.

A typical class involves a slow, deliberate Asana of the body complimented with controlled breathing exercises. This helps push an individual’s stamina and strength while remaining mindful of relaxation.

You can identify the Hatha yoga forms such as poses that are usually characterized by the cobra pose, downward-facing dog pose, and the extended triangle pose.

These poses and numerous others are crucial to strengthening your core, improving your body movement, and aligning the spine.

While Hatha yoga is mainly slow-paced, its counterpart – Vinyasa yoga – is fast-paced. It focuses on each movement being linked to a breath, acting as an anchor as you seamlessly transition from one posture to another.

As such, during practice, movements are generally activated by breath. It shows how centered and connected you are with achieving a balance between Sukha and Sthira.

There are zero sequences in Vinyasa Yoga, although Sun Salutations are regularly used.

Additionally, teachers are free to be as creative with their sequences as they wish. This helps with the proper targeting of various areas of the body and energy.

Benefits Of Both Hatha And Vinyasa Yoga

Irrespective of which yoga you practice, all forms are packed with valuable benefits.

However, when you are trying to decide between Hatha and Vinyasa yoga, you need to consider their particular advantages.

1. Management of PTSD, Stress, And Anxiety

Research indicates that as a form of alternative therapy, regularly practicing Hatha yoga has a net positive effect on mental retrains.

Further studies have found that soldiers who have PTSD had lower effects due to periodically practicing this science.

Likewise, the benefits linked to Vinyasa yoga continue to positively impact thousands of men and women all over the world.

As Vinyasa focuses on breathing, it allows you to boost your mood and confidence while remaining relaxed.

Serotonin is a chemical that’s produced by the nerve cells in your body. People with depression are seen to have lower levels of Serotonin.

Practicing Vinyasa yoga regularly is an excellent way of increasing these levels.

Melatonin is primarily used in relaxing the body. It’s the secret ingredient to a good night’s sleep, and practicing Hatha yoga boosts this hormone production.

Generally, yoga is key to improving balance in your life.

Vinyasa has been known to assist people suffering from low vision to attain harmony and mobility. These individuals move on in confidence with each step taken.

The seamless practice of Hatha yoga helps loosen the muscles and tendons in the body. It effectively breaks down adhesions in the connective tissues, which could hurt your joints.

These are the benefits and differences between Hatha and Vinyasa yoga. Practicing Vinyasa daily will see you transition from one pose to the next in one fluid motion.

Ultimately, whichever yoga option you go with, you are sure to come out on top. Ensure you abide by the routine to maximize all the potential benefits.

Zumba – Fun And Workout Together

Zumba is about having fun while breaking a sweat. It's an enjoyable way to tone your entire body and get in the best shape of your life.
Mark Norey, CPT 9 years ago

Pilates is a body conditioning routine that may help build flexibility, muscle strength, and endurance in the legs, abdominals, arms, hips, and back.
Mark Norey, CPT 9 years ago

Piloxing is a super intense workout that works the entire body muscles. It burns calories and improves your speed, flexibility and vitality. Read more...
Mark Norey, CPT 9 years ago

What I have achieved, is a completely changed lifestyle and not just weight loss. Now I can't say that there is "no time for me" or "can not".
Mark Norey, CPT 9 years ago

Running in slope should be included in our workout as often as possible, especially in summer, when we can afford to run out. 3 reasons for running in slope
Mark Norey, CPT 9 years ago