15 Gross Facts To Blow Your Mind (About the Human Body)
Popular
24.4K VIEWS 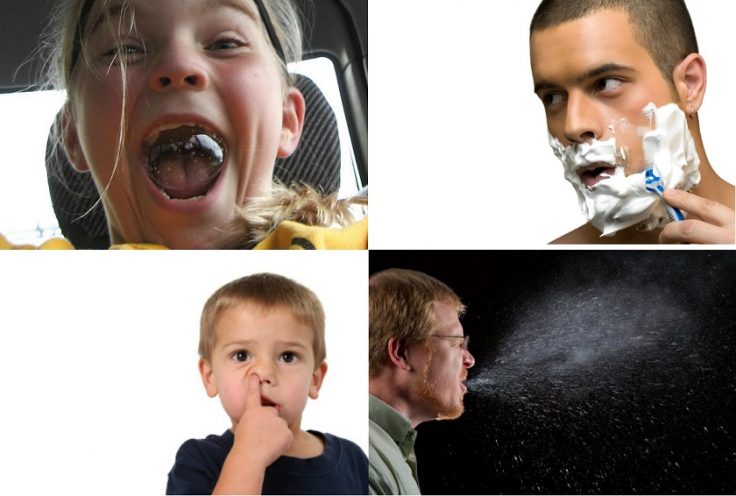 Many people have little mites living in their eyelashes. But there are a lot more gross facts about your body you did not know yet.

We’ve compiled a list with a total of 15 unbelievable things about the human body that might surprise you. Oh, and most of them are gross facts.

Gross Facts (But True) About The Human Body

Prepare to be amazed! Here are 15 unknown and gross facts about your body:

1. Tiny Mites Live In Your Eyelashes

It’s weird and slightly disturbing to think about – but many people have teeny tiny little mites living in their eyelashes.

These microscopic creatures are long and narrow. They live in the hair follicles and pores of your face and particularly love eyelashes, where they feed on oils and dead skin cells. Gross!

But that’s not the only gross thing going on in your body! Find more gross facts below!

It’s staggering to believe that only 1 in 10 of the cells in your body is human. So what are the other cells?

They are made up of the incredible 90 trillion microbes that live on you or in you!

They consist of bacteria and viruses, along with other micro-organisms. And it turns out that many of them play a vital role in keeping you healthy.

3. You Make Enough Saliva To Fill 2 Swimming Pools In Your Life

Talk about drooling! Your body produces an amazing 2 to 4 pints of saliva per day.

Over a lifetime that’s about two swimming pools worth – not that you would want to swim in it.

Your stomach is full of acid. That’s how it begins digesting the food you eat.

But did you know that this acid is so strong that it can dissolve razor blades? It’s been proven in the lab – but don’t try this at home!

5. Feet Can Sweat Over A Pint Per Day

Each of your feet is capable of producing more than a pint of sweat per day. No wonder so many people have stinky feet! Each foot has at least 250,000 sweat glands.

But the sweat itself isn’t at all smelly. The bad odor is caused by bacteria on the skin that thrive in sweaty conditions.

6. You Swallow About A Quart Of Snot Each Day

What kid hasn’t picked their nose and eaten it? But it turns out there’s no need to pick your boogers after all. You naturally swallow about a quart of nasal mucus per day. Yuck!

7. Stinky Stones Can Grow In Your Tonsils

The stones grow when bacteria, mucus, and dead cells get trapped within pockets in the tonsils.

And although the tonsil stones aren’t particularly harmful, they may cause a sore throat – and contribute to bad breath.

It’s commonly believed that a sneeze propels mucus from your body at 100 mph, landing it 30 feet away.

The ‘Mythbusters’ set out to test this myth – and busted it. But what they found was still pretty gross!

That’s definitely still enough to spread thousands of germs through the air. So make sure you cover that sneeze, especially if you’ve got a cold or the flu!

Believe it or not, everyone farts. And most people fart around 14 times per day. That can add up to between 1 and 3 pints of gas per day. Stinky!

10. You Are Hairier Than A Gorilla

It might surprise you to know that most people have about 5 million hair follicles on their bodies.

That’s 3 times as many as a gorilla. The difference is that humans have far more fine hairs than great apes do.

11. You Shed Over 8 Pounds Of Skin Each Year

Shedding is more commonly associated with animals, but just check out these gross human shedding facts:

It’s not just skin that we shed. Before you worry too much about your hair loss, consider this – it’s normal for people to lose between 50 to 100 hairs per day!

13. There Are Different Types Of Ear Wax

The type of ear wax you have is genetically determined. Wet ear wax (yellow to dark brown and wet) is dominant. Dry ear wax (gray and flaky) is recessive.

The dry type is more prevalent amongst Asians and Native Americans. The wet type is more common in African and European people. Who knew?

Are you squeamish about the sight of blood? If so, then you probably don’t want to know that there are around 60,000 miles of blood vessels that transport blood throughout your body.

If you were able to stretch those blood vessels out, that’s far enough for them to go from New York City to San Francisco 23 times.

15. Fresh Urine Is Cleaner Than Water

Believe it or not, your pee is cleaner than saliva, the skin on your face, and even tap water. That’s because healthy urine is sterile until it comes into contact with bacteria.

However, it quickly becomes unsterile after it leaves the body. And don’t think about drinking it – it can upset the balance of salt and nitrogen in the body.

Hopefully, these gross facts did not make you visit the toilet. And hopefully, you’ve learned something new and fascinating about your own body.

-1
Reply
All the nutritional information, health and fitness tips and advice offered here is solely for educational purposes.
We do our best to research and offer the most accurate information possible, but this doesn't replace or represent any professional medical advice.
For the right diagnosis and treatment you should always consult with your doctor.
Just so you know, Fitneass may receive some compensation from the links on this page.

How Does Caffeine Affect Gut Health?

What's the link between caffeine and gut health? Check out this article on the various benefits of caffeine on gut health.
Julianne Bodo, CES, PES 8 months ago

Alzheimer's disease is an ailment that can result in really uncomfortable scenarios, mostly involving memory loss. Here's more on this.
Julianne Bodo, CES, PES 8 months ago

6 Reasons To Boost Your Health With Vegetables

You should look to boost your health with vegetables because they contain all the nutrients, vitamins, and minerals much needed by your body.
Julianne Bodo, CES, PES 8 months ago

How To Maintain A Healthy Quarantined Life

Maintaining a healthy quarantined life is everybody's goal nowadays. Here's how to achieve this while also fighting stress and anxiety.
Julianne Bodo, CES, PES 9 months ago

What Your Urine Color Says About Your Health

Even though it is more of a taboo topic and no one talks about it, urine color is actually an excellent health indicator. Here's why.
Mark Norey, CPT 9 months ago

9 Reasons You Should Be Giving Therapy A Serious Try

Why do we need therapy? Well, to understand our triggers and shortcomings, learn how to deal with stress, and keep our mental health in check.
Mark Norey, CPT 9 months ago

Is Invisalign The Right Choice For Me? 10 Facts About Invisalign

Invisalign is a popular substitution for metal braces; but is it the right choice for you? Here are 10 must-know facts about Invisalign.
Beth Williams 9 months ago

How To Choose The Right Sunscreen For You

If you're looking for a quick guide to choosing the right sunscreen for you, here it is. Follow these tips and fully protect your skin.
Mark Norey, CPT 9 months ago

How To Recharge Your Mind And Body

Restoring yourself is crucial in preventing job burnout. Learn how to recharge your mind and body when feeling exhausted from work.
Julianne Bodo, CES, PES 10 months ago

Snoring is a complex health problem that can be solved through rather simple methods. Here are some straightforward solutions for snoring.
Beth Williams 10 months ago