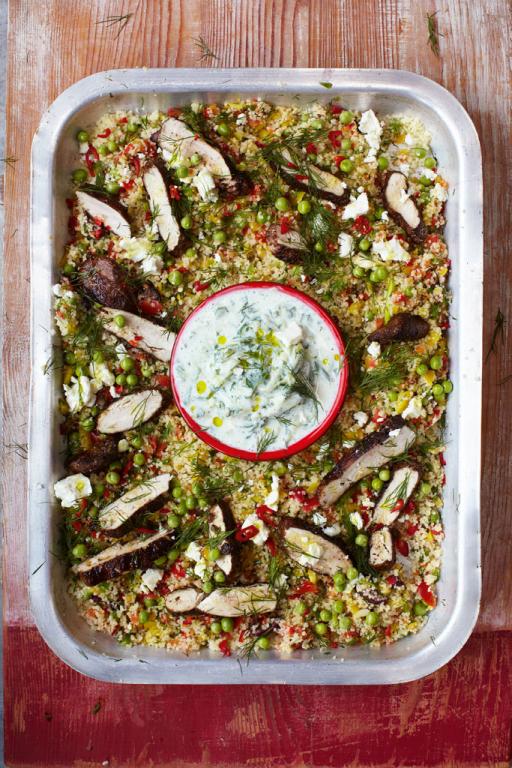 Who knows if Greece will be able to make a repeat of their winning performance at Euro 2004? After losing 3-0 to Colombia in their first game the signs aren’t good, but there’s no better cuisine to eat while watching the footie than Greek food. Full of flavour and vibrant colours, and always great for sharing.

The Greek diet is regarded as one of the healthiest in the world because it’s based largely around fruit and vegetables, wholegrains pasta and rice, fish, and a small amount of cheese and yoghurt.  Non-meat protein sources include beans and legumes like fava, split peas and lentils are also a popular staple, usually used in soups, stews and salads.  You might notice these array of foods don’t differ hugely from what I regard as a healthy balanced diet.

The Greeks are also famous for their love of olive oil, which is lower in saturated fat than butter, so a good choice for cooking. If you’ll forgive some geeky science, recent evidence published by the PNAS (Proceedings of the National Academy of Sciences) journal shows that the combination of olive oil and leafy salad or vegetables is what gives the Mediterranean diet its healthy edge, because the formation of nitro fatty acids between the two food groups lowers blood pressure. So I recommend that as a side whatever you’re eating!

Sadly though, even Greece appears to have become a victim to the global obesity epidemic and has struggled to stick to its healthy lifestyle and image. According to the World Health Organisation, 33% of 11-year-old boys and girls in Greece are overweight, which is actually the highest prevalence in Europe.

It’s likely down to the pop up of fast food outlets in the major cities and increased access to processed food high in fat, sugar and salt. Also, if you’ve ever tried saganaki – basically a fried hard cheese – then you’ll know it’s a wildly indulgent dish, but delicious all the same.  A nod should also be given to tiropita, otherwise known as cheese pie.

For some delicious Greek-inspired recipes to eat when the footie is on, my favourite is Jamie Oliver’s twist on Greek chicken with couscous, which everyone can tuck in to and help themselves.

What do you need?

How to prepare the Greek chicken recipe?

This Greek chicken recipe contains 4 servings  and each serving has about 700 calories. So be careful with the portions if you’re on diet or just want to maintain your silhouette.

I’m not sure of Greece’s chances of winning the Fifa World Cup 2014, but they certainly win when it comes to the dinner table.

Pancakes With Yogurt Sauce For A Delicious Dessert

This is our recipe of pancakes with yogurt sauce and we recommend it for athletes who do not eat dessert for fear of gaining weight.
Mark Norey, CPT 10 years ago