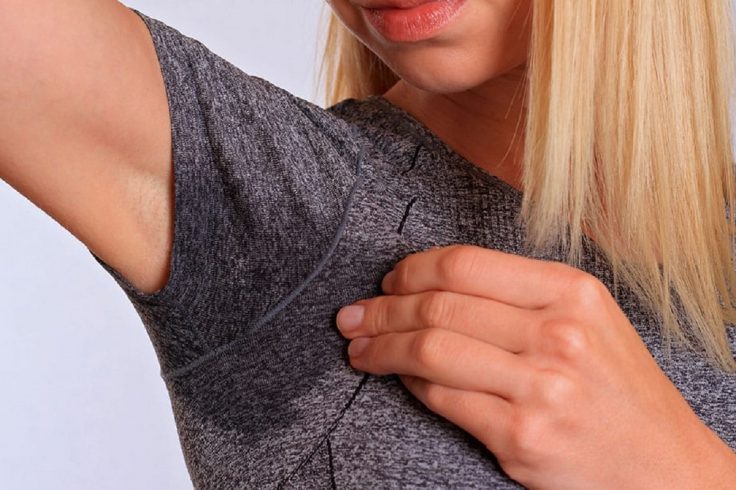 Do you suffer from excessive underarm sweating? Did you know that a simple Botox treatment can help you deal with this situation and boost your confidence and self-esteem? Read on to learn more about it!

Summer is once again here, which means warmer weather and sweater afternoon. If you don’t like to sweat, you might find this season very uncomfortable and irritable.

This is especially true if you have a case of Hyperhidrosis or excessive sweating. As per WebMD, there is an estimated 2% to 3% of the American population who suffers from this condition.

The commonly affected area when it comes to Hyperhidrosis are palms, soles of the feet, and underarms.

Excessive perspiration often causes unhappiness due to lack of confidence and self-esteem. It stains the clothes and is often an embarrassing situation during special occasions such as dates, and special events such as business meetings and more.

The stain is not only the thing that people hate; sometimes, the smell really ruins things.

Fortunately, there are more available options for people who suffer from this condition. With the advancement of technology in recent years, patients can now choose Botox treatments to stop excessive perspiration.

What Is Botox? And How Is It Used As A Treatment?

Botulinum toxin, commonly known as Botox, is currently the most used non-surgical cosmetic treatment in the United States. This is applicable to both men and women patients.

For the technical term, it is a neurotoxin which is derived from microbes which are the cause for botulism. Before concluding that this neurotoxin might not be safe, a small dosage of it, when administered properly by a medical professional, is safe and can be used to multiple conditions involving different parts of the body.

This famed neurotoxin is usually used in cosmetics, usually in treating wrinkles which appears between the brows, in the forehead, around the mouth, and at the sides of the eyes.

But its use is not limited to cosmetics and skin problems. According to Healthline, it can be used as a treatment for neuromuscular conditions such as muscle spasms and migraines.

What makes Botox a very popular treatment, especially in cosmetics, is because it does not require any surgery.

What most people don’t know is that Botox injections are also used in treating excessive perspiration. This is especially in cases where antiperspirants are not enough.

Botox treatments are even approved by the Food & Drug Administration in 2004 as a treatment for Hyperhidrosis, which is the severe sweating of the underarm. The neurotoxin got its FDA approval in 1989, as per Sweat Help.

Botox For Underarm Perspiration And Hyperhidrosis

There are a lot of reasons why a lot of people consider using Botox as a treatment for excessive underarm sweating is for a boost of confidence.

Usually, underarm problems start to appear during adolescence, which is a very critical part of a human’s development. Excessive sweating can cause embarrassment and other negative results.

However, according to Dr. Robert Maloney, a Botox expert in Naples, FL, sweating is not caused by nervousness, as it is only an uncontrollable sympathetic response from the nervous system. Botox treatments act as a roadblock to prevent his overreaction.

How Does Botox Work In Treating Hyperhidrosis?

It is injected in the area where excessive sweating happens, the substance blocks the nerves which are responsible for the sweat glands activation. Simply put, if your nerves that are responsible for sending signals to sweat are blocked, that part of your body will not sweat anymore.

Botox has been proven to reduce the sweating of palms in about 80 to 90 percent of the cases while the success rate for sweating in underarms gives 75 percent of success.

How Is It Administrated?

When receiving a Botox injection, always make sure that it is administered by an experienced practitioner.

The treatment will usually be over in under half an hour for both underarms.

The area will be cleaned and will be applied with corn starch which will help in marking the right place to be injected. Don’t worry if the affected skin will turn black after the corn starch was applied, that’s normal.

When Can You See The Results?

This benefit usually lasts for four months to twelve months, with the longest effect 14 months.

Continuous treatment will also not affect the effectiveness of each injection. And because the sweating in the underarm is only a small part of the whole body function, the whole treatment is safe.

Although Botox injections are usually safe and tested, some people would react differently from the treatment. There are side effects which can appear after the treatment which can be experienced by the patient.

If symptoms appear, call your doctor immediately to provide relief to the symptoms. Usual side effects are tolerable, such as:

One or all symptoms might appear and should deal with immediately. Patients who receive treatments are advised to go to their doctors if the following side effects appeared:

Top Candidates For The Botox Treatment

The ideal candidate for receiving Botox injections are those who are being plagued by their sweating condition, especially if the Hyperhidrosis is damaging their confidence and self-esteem.

Botox treatment is also applicable to people who are not able to live a productive life because of their condition. It is applicable to all ages, with younger people encouraged in order to benefit in their career and personality development.

Botox can be expensive, but its efficiency and safety are factors that drive its price high. Only trust medical professionals who have been in the industry for years and have a lot of experience can practice this Botox treatment.

Consult with a professional before opting for this anti-perspiration treatment. And if the treatment is not recommended for you, there are still alternatives for Hyperhidrosis which you can do to reduce the effects of your condition.

Medical X-rays are non-invasive and painless imaging tests used by doctors to diagnose diseases and guide them through different treatments.
Julianne Bodo, CES, PES 9 months ago

The clinical medical assistant is a member of the medical team that provides patient care. Here's all you must know about them.
Beth Williams 10 months ago

There are a few guidelines medical facilities can follow to offer better care quality for patients. Here are five things to consider.
Julianne Bodo, CES, PES 10 months ago

Proper Nutrition For Diseases Of The Musculoskeletal System

In modern society, diseases of the musculoskeletal system are not uncommon. But with proper nutrition, they can be prevented and treated.
Julianne Bodo, CES, PES 1 year ago

If you suffer from ocular hypertension or glaucoma, your eye doctor might recommend you Vyzulta medicine to help prevent blindness.
Beth Williams 1 year ago

How Dental Health And Technology Are Evolving Together

Dental health and technology can work together to simplify your visit to the dentist during and after the pandemic. Here's how.
Beth Williams 1 year ago

Health Problems That An MRI Scan Can Detect

An MRI scan helps medical professionals to diagnose and detect a variety of health conditions that aren't otherwise visible to the naked eye.
Beth Williams 1 year ago

How To Do Patient Engagement Right?

If you want to make your patients feel cared for, just providing treatment is not enough. Here's how to improve patient engagement.
Julianne Bodo, CES, PES 1 year ago

CBD To Reduce Swelling From Injuries And Inflammation

Most scientific research highlights the potential of CBD to reduce swelling from physical injuries and inflammatory disorders. Here's how.
Beth Williams 1 year ago

Here are three of the most common reasons why people seek legal assistance for injuries that were the result of medical negligence.
Beth Williams 2 years ago