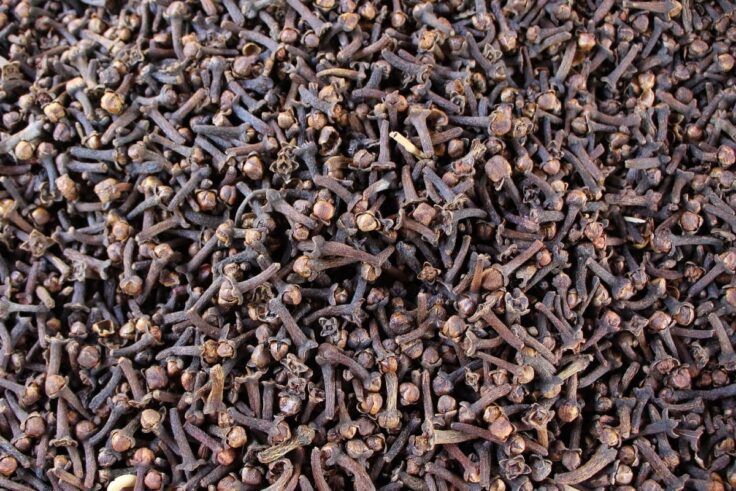 Looking for something to spice up both your food and health? Check out these health benefits of cloves backed by scientific research.

Cloves are a treasured spice among people. They are the dried aromatic flower buds of a tree and have been used for both culinary and medicinal purposes throughout generations.

Cloves also go by the name Syzygium aromaticum. This plant is native to Indonesia, particularly the small islands of Maluku that is located in Eastern Indonesia commonly dubbed the ‘spice islands.

The plant has a place in the Myrtaceae family, the biggest class of the species which comprises approximately 1200 to 1800 blooming plants.

Cloves contain a rich compound called Eugenol, which has many uses in different industries such as cosmetic, food, agriculture, and pharmaceutical industries.

Different people in several countries have different names for cloves. These are:

The major producers of cloves are Indonesia, India, Malaysia, and Sri Lanka but greater quantities are produced in the West Indies, Madagascar, Kenya, Tanzania, mainly Zanzibar.

The Origins Of Cloves

Many believe that cloves have existed before Christ, in the first century. The first sign of cloves was given in ancient china.  A Chinese Physician had written to the court visitors that were to visit the Emperor expressing the need to always place a clove in their mouth to prevent the emperor from experiencing bad breath.

In the 4th century A.D, the Arabs traded cloves to the Europeans and in the 16th century, the origins of cloves stopped remaining a mystery because of the discovery of Indonesia by the Portuguese.

In the 17th century, A.D cloves were introduced to Sri Lanka and established in India by the East India Company in the 18th Century A.D.

A common tradition that is predominant in Europe, is for its natives to make ‘pomanders’ that undergo the process of piercing oranges with clove buds and hanging them around their houses during Christmas for decorative and fragrance purposes.

The General Uses Of Cloves

For more than 2,000 years in ancient china, cloves have been used as a spice and fragrance while Its oil has also been used In Chinese traditions as an antibacterial, antiparasitic, and antispasmodic (an agent used to relieve muscle spasms) while the buds are used to treat diarrhea and chronic/acute gastritis.

A mixture of clove and tobacco is used to make a special cigarette called Kretek that is common in Indonesia.

A mixture of ground cloves and honey is used as a remedy to cure skin conditions. The antibacterial properties found in them are used in a range of mouthwashes and some toothpaste to kill pathogens.

Due to the presence of Flavonoids, Cloves has anti-inflammatory properties and also improves the immune system.

In holistic treatments, pure clove oil is used in aromatherapy for arthritis and rheumatism. They are also good for patients with diabetes because they control blood sugar levels.

Cloves have also been used to treat common digestive conditions such as dyspepsia, flatulence, nausea, and diarrhea.

Inhalation of clove oil has been proven to help people with respiratory conditions such as asthma, sinusitis, common cold and also reduce lethargy, restlessness, and headaches.

A compound found in cloves called Eugenol has been shown to prevent the formation of blood clots. 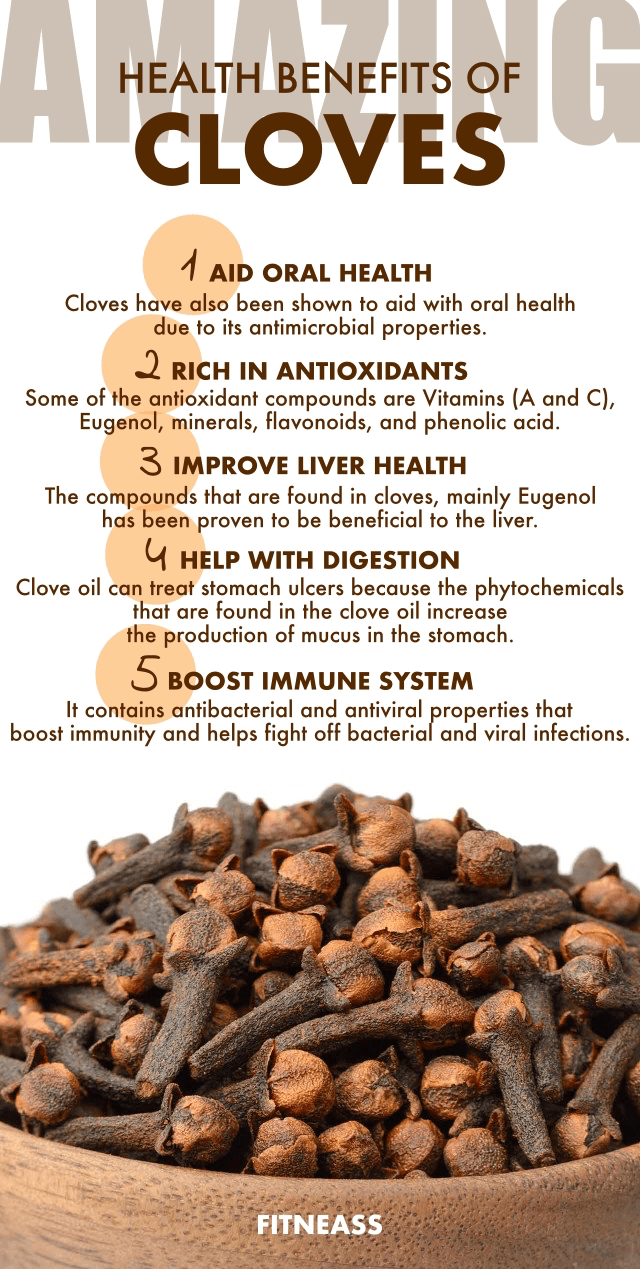 Now that we have broken down the basics surrounding cloves, what does science say?

Studies carried out to assess the antiseptic potential of cloves revealed that clove oil had a greater antimicrobial effect, compared to a clove extract that included ethanol and a known preservative called sodium propionate.

Cloves have also been shown to aid with oral health due to its antimicrobial properties. According to a test-tube study, compounds that were extracted from cloves were found to stop the two types of bacteria that contribute to gum disease.

Cloves contain rich compounds that are beneficial for the human body. Antioxidants are one of them and they are predominately found in the oily interior of the cloves.

Some of the antioxidant compounds are Vitamins (A and C), Eugenol, minerals, flavonoids, and phenolic acid.

Vitamin C is responsible for protecting the body against oxidative stress and fight off free radicals.

An antioxidant research study was conducted to compare 6 various spices and cloves were shown to have maximum antioxidant potential more than garlic, ginger, and mint.

The liver has many functions, one being the main detoxification organ that uses several enzymes to process, filter, and remove the body’s toxins.

Because of the high functionality that the liver performs, it is subjected to high levels of stress that leads to the build-up of free radicals.

This often leads to either chronic or oxidative stress that causes metabolic imbalances in the body.

The compounds that are found in cloves, mainly Eugenol has been proven to be beneficial to the liver.

Studies have also shown that both clove oil and eugenol were found to improve liver function and reduce inflammation among rats that had liver disease.

Apart from being anti-inflammatory, Eugenol can also improve damaged tissue and reverse signs of liver cirrhosis.

Phytonutrients are natural compounds that provide essential nutrients for the human body. Cloves contain phytonutrients that help stimulate the secretion of digestive enzymes that help with the reduction of stomach problems such as bloating, flatulence, gastric irritability, and dyspepsia.

It has also been proven that clove oil can treat stomach ulcers because the phytochemicals that are found in the clove oil increase the production of mucus in the stomach.

The human body needs to have a strong immune system. Cloves have the highest antioxidant potential in comparison to other superfoods.

This is because clove oil contains polyphenols that increase white blood cell count, resulting in a stronger immune response against bacterial and viral infections.

Finding a way to implement cloves into your diet can benefit you tremendously. Ground cloves can be used in similar ways like cinnamon and ginger to flavor soups, meat, and even baked goods.

Cloves have been used for centuries and are considered safe, but too much of something is harmful to one’s health. This is because Cloves contain a high concentration of Eugenol that can cause liver damage when taken in high doses.

Clove oils are often diluted with other oils such as coconut to reduce the effects. And they are not recommended for children under the age of two.

Hopefully, these amazing health benefits of cloves changed your mind about them and made you consider adding them to your next recipe.

This 30-day flat abs challenge is all you need to strengthen your core muscles so you'll get stronger and fitter week after week.
Mark Norey, CPT 3 days ago

What Athletes Need To Know About Recovery And Sleep

Here is what scientists found about recovery and sleep and how their research might help you enhance your athletic performance.
Julianne Bodo, CES, PES 6 days ago

Gym Safety And Hygiene During The Pandemic

Since the start of the COVID-19 pandemic, gym safety has taken a turn to center on hygiene. Here are the new cleanliness norms for gyms!
Beth Williams 6 days ago

Using a smart balance board in your physical therapy is a great way to add levels of challenge and complexity for a better overall recovery.
Julianne Bodo, CES, PES 1 week ago

Besides its health benefits, the use of Epsom salt baths is a simple, easy, and inexpensive way to practice some well-deserved self-care.
Beth Williams 2 weeks ago

How To Keep Your Body Fit After Accident

Recovering and keeping your body fit after an accident can actually take a lot of time. Here are some tips that will boost this process.
Beth Williams 2 weeks ago

Are you looking for detoxing tips and techniques to cleanse your body after the holidays? Here are five of our favorite methods!
Julianne Bodo, CES, PES 3 weeks ago

By using gripe water in conjunction with other gas remedies, you can soothe your baby's suffering and help them feel a lot better.
Julianne Bodo, CES, PES 3 weeks ago

There are a few exercises you can do every morning before stepping out of bed to reduce plantar fasciitis pain. Here are the best moves.
Julianne Bodo, CES, PES 4 weeks ago

Take care of your health and make it a top priority by choosing these five best supplements to take daily for your overall health.
Beth Williams 1 month ago